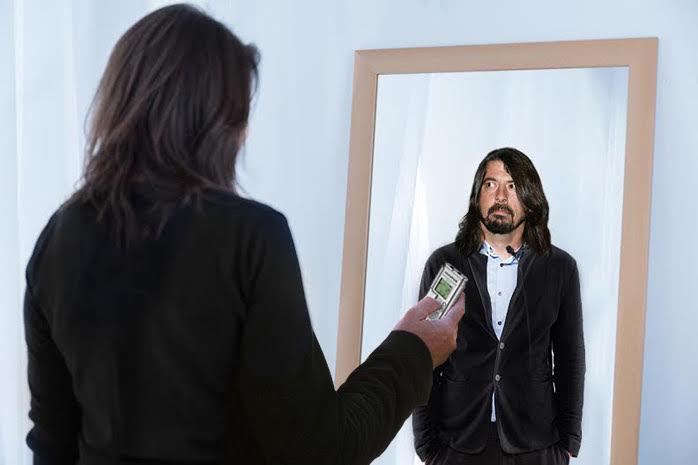 The prospective documentary, “Who Fighters?: A Rock-and-Roll Opus,” features Grohl prominently throughout, and after preparing mentally to wax poetic about his work with Scream, Nirvana and the birth of grunge for two and a half hours, Grohl was not going to sit idly by and let his musings go unrecorded.

Speaking directly into his bedroom mirror and armed with a handheld audio recorder, a sincere and freshly showered Dave Grohl set about getting to know “the real Dave Grohl”.

“So what was it like, you know, growing up in Warren, Ohio, the son of Virginia Jean and James Harper Grohl?” Grohl asked himself, stealing glances at his own Wikipedia page. “You know, I had a good childhood, but I was itching to get away. I wanted something more. I had a fire in my belly for rock from an early age,” pontificated an excited Grohl back to himself.

Grohl admitted it was a welcome relief to finally be interviewed by someone who seemed as knowledgeable and passionate about his musical history as he is.

“A lot of times I talk with documentary producers that just have a cursory knowledge of rock music, but when it comes to me, I really know what I’m talking about, so it was refreshing to talk with someone who is so charming and funny, with a deep understanding of our shared musical heritage,” said Grohl, eating a peanut butter sandwich over his kitchen sink during a brief break to change tapes.

Not wanting to waste the chance to interview Dave Grohl without getting into Grohl’s extensive knowledge of the 1980’s DC Hardcore scene, Grohl smoothly segued into Grohl’s musical coming of age. “I looked up to those guys you know? Ian, Henry, HR; those guys were my heroes,” Grohl replied perfunctorily, as the interview hit hour three.