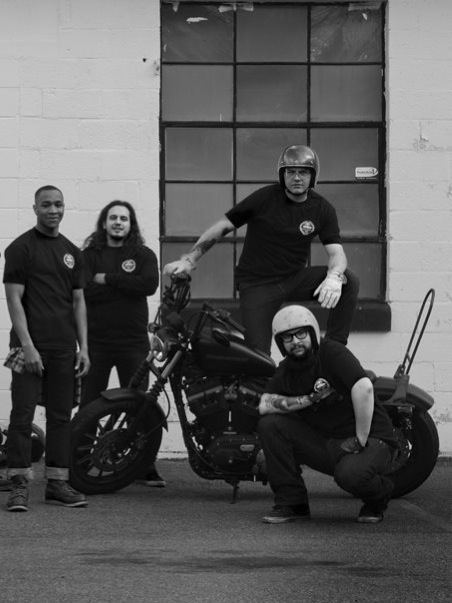 PHILADELPHIA, Penn. – With it becoming harder and harder to turn a profit as a touring band, some musicians are going to great lengths to save every dollar — one cool band even decided to scrap the tour van altogether and tour on a single motorcycle.

The cool four-piece hardcore band, known as The Wild Ones, are surprised they are the first to try this new way of touring.

“It was all so easy. I got like $2,200 for the van when I sold it to some food bank. It all worked out because I got my motorcycle permit like six weeks ago. So I am ready to hit the open road with my best pals — playing music, causing trouble — life doesn’t get any better,” lead vocalist Ben Gomes said. “Nothing says freedom like four guys on a motorcycle dragging a U-Haul trailer.”

Mitch Franklin, a motorcycle enthusiast and a charter member of the local motorcycle club “Demon Hogs,” was confused by the cool band’s idea. “How are they all going to fit, exactly? I mean it’s tough enough to ride a bike with your old lady on the back yapping in your ear and throwing her weight around. I don’t know how it’s going to work with four guys on one bike.”

The bike being used for tour was recently purchased off of Craigslist, but none of the cool band members are currently proficient enough to ride the motorcycle back to their practice space.

“The guy I bought it off of was so bummed, his wife is making him sell his bike because they just had a baby. We got a great deal, one of us just needs to get good at riding this thing,” Gomes said.

The Wild Ones plan on hitting the road this fall once they’re done flooding their Instagram followers feeds with pictures of band members posing with the motorcycle.

Gomes went on to add, “What’s the point of having a bike if everyone in the world doesn’t know you ride?”