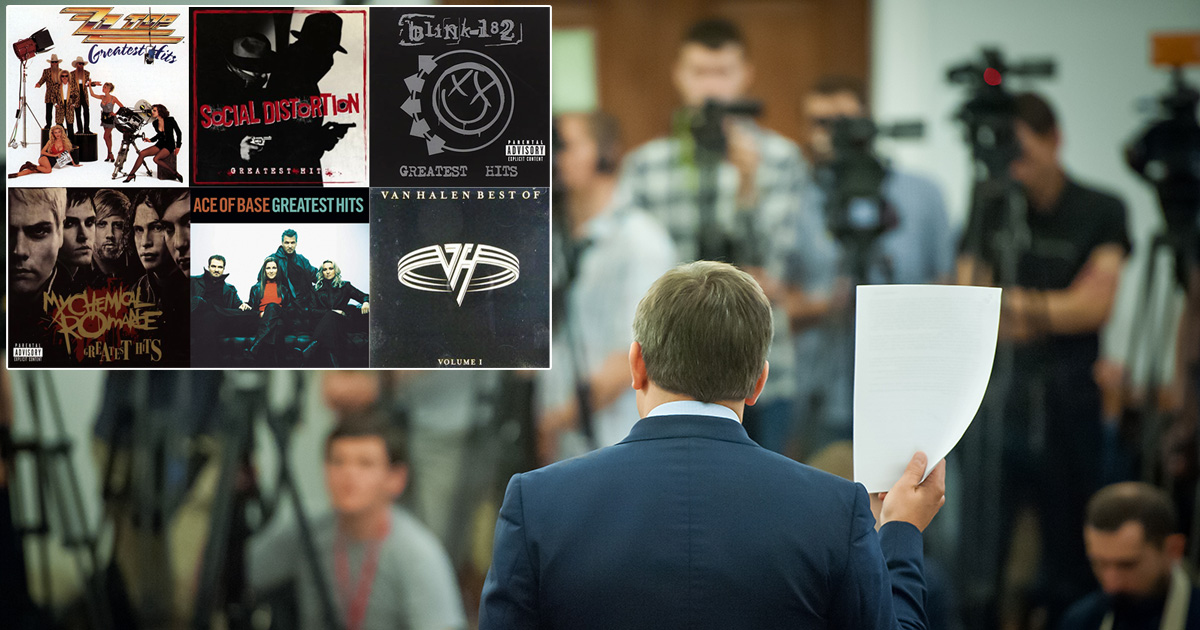 SACRAMENTO, Calif. — Multiple residents of California filed a class action lawsuit against any bands who included new material on a “Greatest Hits” compilation album, a lawyer representing the group announced.

“I’m proud to represent the countless American citizens and people around the world that are victimized by this insidious practice perpetrated by some of the most powerful artists and labels in the music industry,” explained lawyer Keith Hill. “This heinous crime has been committed in plain sight for far too many years; it’s time for Social Distortion, ZZ Top, Ace of Base, and countless others to pay for their transgressions. Van Halen put two new songs on their ‘Best Of,’ so we seek double the compensation from them. Our message is clear: you will not get away with this, and music consumers are sick of it. We want the hits.”

Fans who have devoted time, money, and effort into supporting their favorite bands wondered how musicians can sleep at night after committing such acts of deceit.

“I’ve been a My Chemical Romance fan since the ‘I Brought You My Bullets’ era, so imagine my surprise when I bought their ‘May Death Never Stop You’ compilation for my daughter,” stated diehard MCR fan Ophelia Smith. “It was her first CD. I explained how important the band is to my life, but when we popped the CD in, it played some bullshit new song with the Reggie & the Full Effect guy on keys. My daughter laughed in my face and put Post Malone back on. This was my chance to finally connect with her. The album art clearly states ‘Greatest Hits 2001-2013,’ not ‘Greatest Hits and One Throwaway Song That Shouldn’t Have Made It Past Demos.’ My Chem and Reggie & the Full Effect fans deserve better.”

Music industry insiders speculated on why bands commonly insist on including one new song of weaker material in compilations that should otherwise only show the strongest moments of their career.

“You have no idea what kind of discussions, fights, and threats are made in the deliberations for choosing a greatest hits track listing,” explained legendary band manager Thomas Cromwell. “I had to literally pull Keith Richards off Mick Jagger when discussing songs to include on the ‘Forty Licks’ comp. So new tracks are usually suggested as a peace offering for whoever didn’t get their lame deep cut included. We had to add four new tracks on that one to get everyone to calm down, and I solidified my place in hell in the process.”

The Supreme Court is already expected to weigh in on a heavily contested case that will determine whether or not live versions of songs can also be included on greatest hits compilations.