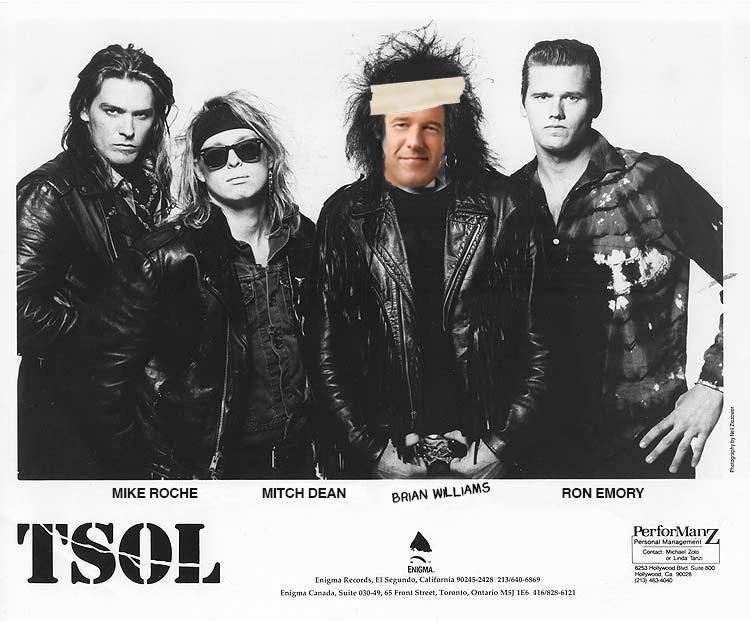 NEW YORK – While speaking at a luncheon in New York, suspended NBC News anchor Brian Williams waxed nostalgic on his years as the T.S.O.L. front man following the departure of Jack Grisham in 1983.

“I was at a crossroads in my career and I really wanted to mix it up, so I auditioned. I can’t remember what I sang – it may have been No Doubt,” Williams said.

Williams told attendees he stayed with the band three years, traveling extensively and releasing two albums. “At one point, I remember living in my van in Long Beach, panhandling for extra cash and eating stray animals,” Williams said. “There were ups and downs, but what you really remember is the camaraderie. If nothing else, you remember that.” He then talked in extensive detail about the mohawk that preceded his present-day news anchor’s coif.

When asked about his most memorable gig, Williams described a packed show at the Starwood in Los Angeles with Black Flag. At press time, no members of Black Flag were able to corroborate said show.

Despite the lack of documentation, Williams insisted it was a seminal point in the band’s history. “Creatively speaking, the years I spent with G.F.O.L. influenced us both,” Williams said.

Williams spoke wistfully as he described touring up and down the West Coast. “Some of those shows got pretty raucous; people throwing bottles, cans, shoes — we took some heavy fire.”

“Some of those shows got pretty raucous; people throwing bottles, cans, shoes — we took some heavy fire.” Brian Williams

UPDATE: The credibility of Williams’ claims have been called into question, leading many to suspect other newscasters may have lied about their ties to the underground music scene. The Daily Show host Jon Stewart has been questioned about his ties to infamous New Jersey punk venue City Gardens. Also under scrutiny, Rachel Maddow has adamantly defended her claim that she was the one who threw yogurt at Earth Crisis when they played Middlesex College in 1996.
Article by John Kennedy (@robotturbot). Photo provided by Brian Williams.