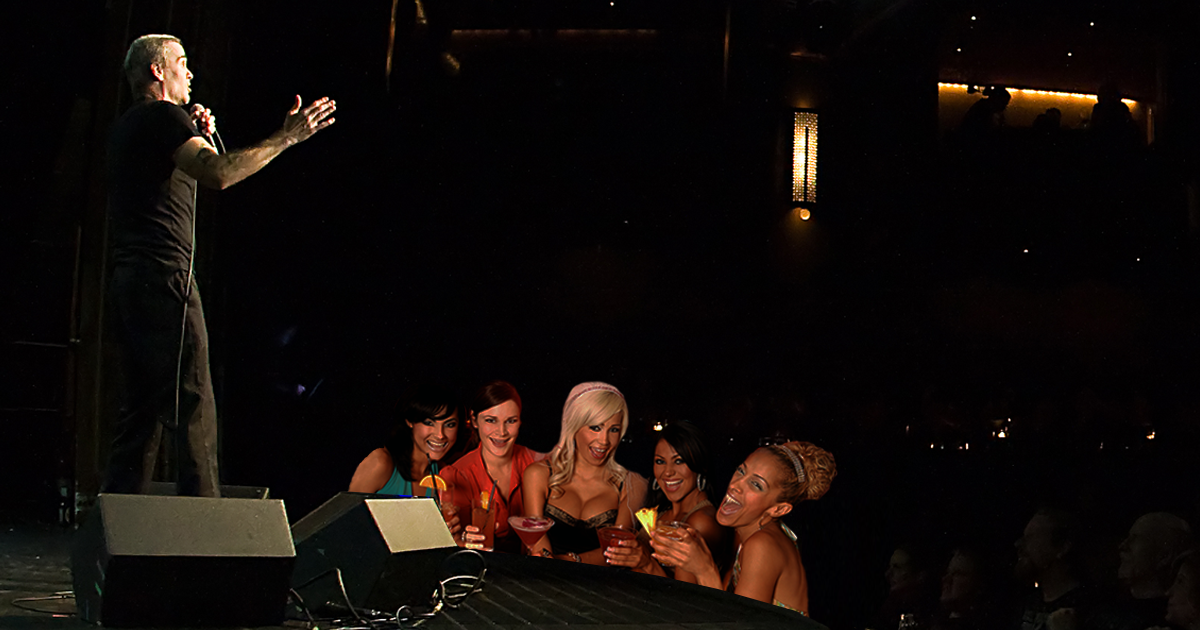 NEW YORK — Henry Rollins’ intimate and passionate spoken word performance at the Gramercy Theater last night was interrupted by a disruptive and brazen bachelorette party, according to annoyed attendees on both sides.

The group of bridesmaids and well-wishers confirmed they had planned to “get totally crazy” celebrating Melissa McMahon, the bride-to-be.

“[Melissa] is marrying Greg next week, so we wanted to make her last night with us memorable,” said maid-of-honor Stacey Calhoon. “I saw that hunky silver-fox from the Calvin Klein ads was doing stand up. His neck is like a suitcase, and Mel totally wants to ‘check that bag,’ if you catch my drift.”

Witnesses claim the pink-clad, stiletto-heeled women burst into the theater 30 minutes after the performance started, calling absent friends to try to meet up later and spilling the frozen margaritas they snuck in with them.

“The penis-hat girl kept answering [Rollins’] existential, rhetorical questions aloud to herself,” complained Sidney Etka, who sat three rows behind the party. “She must have said, ‘I know, right?’ a dozen times. I bet she couldn’t even name five Black Flag songs.”

Calhoon defended the eight-woman entourage. “The show was so boring,” she said. “A grown man bragged for 30 straight minutes about being stuck in traffic in Wisconsin in the ‘80s. Who cares? It took me 40 minutes to get into the city from Jersey, and you don’t see me bitching about it.”

The former Black Flag frontman, no stranger to threats from raucous crowds, allegedly grew distracted on stage and aggressively engaged the hecklers.

“I can tell when Henry’s really getting worked up, and when he said, ‘I’ve been preparing for this evening for what seems like my entire life, and you’re just going to talk loudly over me? Stop being assholes,’ I knew it was about to get bad. He says that whenever he’s upset,” said tour manager Stan Putkin. Witnesses confirm Rollins then ripped off his black t-shirt to try to intimidate the boisterous bridesmaids, but was met with further taunting and cheering.

“I had a feeling things would heat up a little. I just wish it didn’t take four hours to finally see some muscles,” said McMahon after the encounter. “Greg is going to be so jealous.”