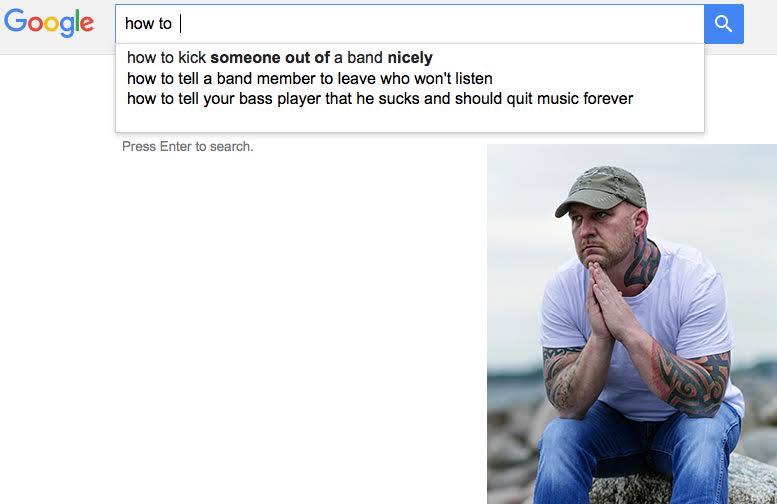 DENVER – Derek Kennedy, bassist of hardcore band Voice of Fury, had his growing suspicions about being kicked out of the band confirmed late last week by an autocomplete feature on the laptop he had borrowed from the group’s frontman.

“All I wanted to do was look up some YouTube tutorials on how to be a better bass player, and I find this out,” said a crestfallen Kennedy.

Kennedy admits that he should have seen signs leading up to this. For the last month his fellow band members have ignored his calls and texts about practicing, stopped laughing at his Bill Cosby impression, and had even jammed with another bass player.

“They said it didn’t mean anything and was just for fun,” Kennedy insisted.

Voice of Fury frontman Brandon Cole suspects Kennedy may have been doing more than a simple Google search. “What Derek was doing was snooping, plain and simple. Not cool, man. I only let him use my computer to search for a new job, since he got fired from the carwash for skipping work to play a show with us last weekend,” said Cole, clearing his browser history.

“Yeah, he left some of his tabs open for Facebook and Gmail, but it’s not like I intentionally clicked on those,” said Kennedy in response to snooping allegations. “I didn’t mean to open up anything. It must been some sort of computer glitch or something.”

Sources confirmed upon opening the tabs Kennedy saw a Facebook message exchange where Cole’s girlfriend asked, “Did you do it yet?” To which Cole responded, “No, he’s really bummed Jessica just left him so we’re gonna give him a few more weeks.”

There was also an incomplete email draft that read, “Hey dude, I dunno how to say this but I think it’s ti.”

With all evidence pointing to his being replaced, Kennedy felt he was left with only one option: quit. In a group text sent at 3:30 a.m. Sunday morning, he wrote, “I’ve really enjoyed playing with you guys, and consider you all my best friends, but I’m just not into the band anymore.”

Since quitting, Kennedy has yet to hear back from his ex-bandmates.

“What? He quit?” A confused Cole said. “Oh, by text? I only read the other group text — the one with the new guy.”