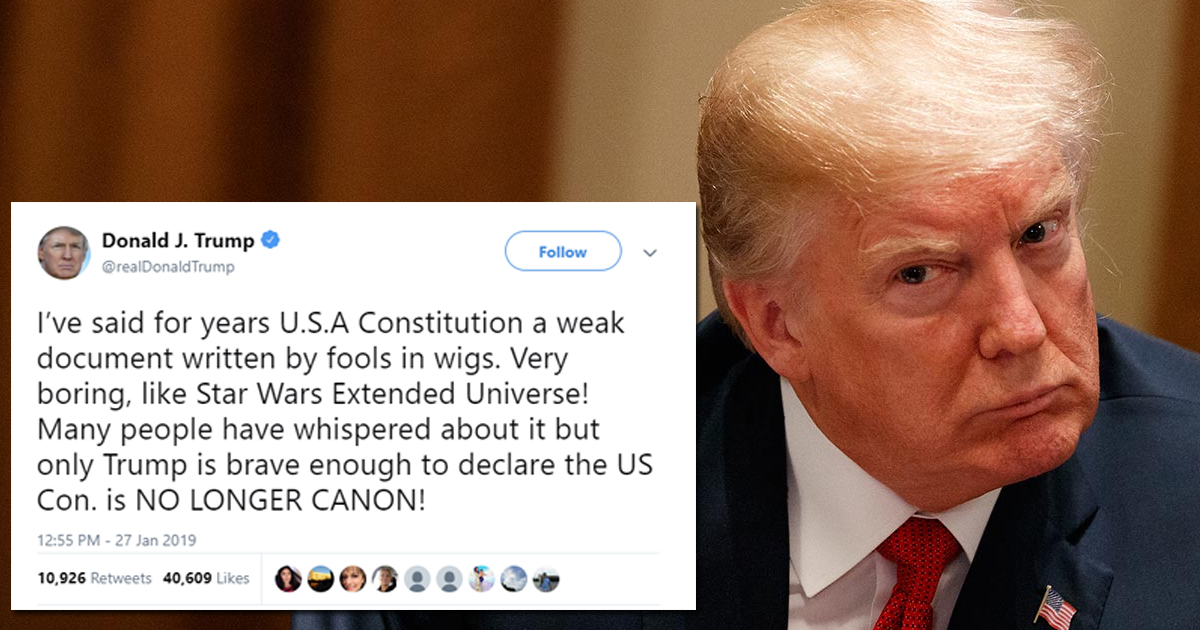 WASHINGTON — The newly-emboldened Democratic Party is in disarray today after President Trump announced on social media that the United States Constitution is no longer canon.

The tweet, seen below, was part of a fifty-three part thread about the government shutdown.

I’ve said for years U.S.A Constitution a weak document written by fools in wigs. Very boring, like Star Wars Extended Universe! Many people have whispered about it but only Trump is brave enough to declare the US Con. is NO LONGER CANON!

Democratic leadership were taken aback by the sweeping, unilateral change in the lore of the United States.

“Who does he think he is, J.K. Rowling?” said House Speaker Nancy Pelosi on CNN. “This is a sad day for any American especially those like me that have fond memories cosplaying the Bill of Rights during the Bicentennial ConCon 1976 in the capital. Shit, we’ll have to completely retcon our country’s backstory. Also, I need AOC to explain to me what retconning is.”

Speaker Pelosi was then swept away by a group of protesters in the Capitol Rotunda. She was last seen fighting Senator Kamala Harris in the gift shop for the final remaining “First Edition” Constitution souvenir.

During a hastily assembled press conference, the Trump Administration defended the President’s ability to edit the wiki of the United States.

“It’s his right as commander-in-chief to declare what’s canon and what isn’t,” said Press Secretary Sarah Huckabee Sanders. “The Constitution was released too long ago to resonate with modern audiences. I mean, just look at its overuse of the ‘equal branches of government’ trope. The document simply does not reflect how we want the country to be in the future, which, by the way, we are now calling ‘The New 50.’”

At press time, President Trump was asking aides if it’d be worth fan blowback to kill off a character as popular as Robert Mueller.