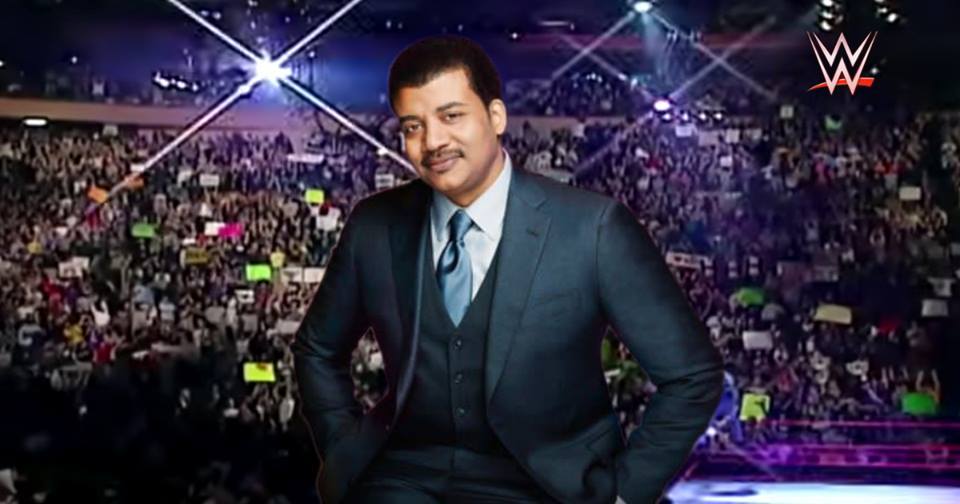 Neil deGrasse Tyson took to Facebook earlier this week to share new discoveries about the WWE Universe. The famed American astrophysicist and cosmologist reportedly began studying the WWE Universe soon after it was discovered by Michael Cole on Monday Night Raw in 2008.

“I am excited to share with all of you my groundbreaking discoveries about the WWE Universe,” Tyson begins his Facebook post. “For over 8 years I’ve been perplexed by this parallel universe that is broadcasted into our homes every Monday night. At first, my studies raised more questions than answers. For example, how does Roman Reigns’ hair stay so wet? And why are there always unexplained tables, ladders, chairs, and kendo sticks under the ring?”

After introducing more of the commonly misunderstood aspects of the WWE Universe, Tyson began explaining his new discoveries.

“The more I studied the WWE Universe, the more I began to make sense of the physics regarding it. Gravity, it seems, does not affect certain superstars as it would you or me. For instance, Shawn Michaels is able to freeze and pose in mid-air while executing breathtaking top rope elbow drops. CM Punk, on the other hand, falls from the sky at such an accelerated rate when attempting the same maneuver that it can only be concluded that gravity in the WWE Universe is not a constant force. In fact, it seems gravity has completely forgotten one superstar named Neville.”

Tyson’s studies not only revealed new information about the superstars in the WWE Universe, but also the fans.

“The spectators within the WWE Universe are also not bound by the same biological laws we in our universe are. The average member of the WWE Universe can only communicate through the use of synchronized chanting. They use these chants to express both their excitement and displeasure, but it’s mostly just a way to make themselves the focal point of attention. The spectators also all suffer from partial deafness, as they frequently chant, ‘What?’ when a superstar is speaking.”

Reaction to Tyson’s choosing to focus on studying the WWE Universe has been mixed with many suggesting his time and funds could be better utilized elsewhere.

“I just want to show everyone that I’ve still got it,” Tyson explained.