Youth Pastor Knows Someone Who Is Pretty Punk Rock, and His Name Is Jesus Christ 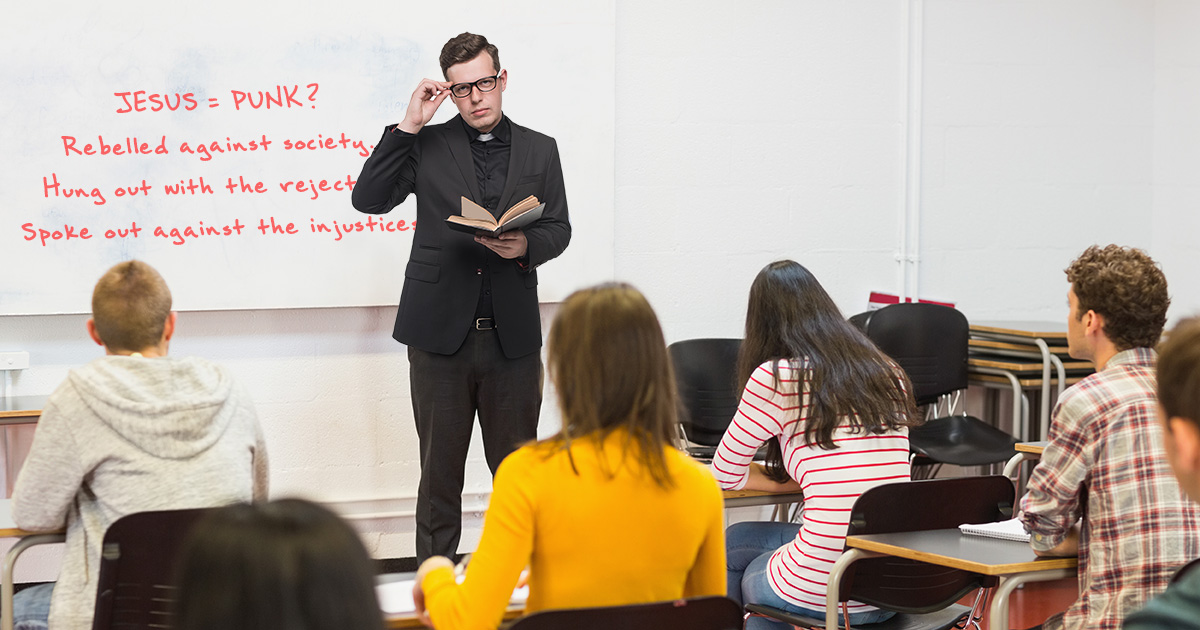 IRVINE, Calif. — Youth pastor Doug McCabe casually mentioned yesterday that he had a friend who was “a real punk rocker, and his name is Jesus Christ,” while attempting to engage 16-year-old punk parishioner Alex Freeman, witnesses confirmed.

“I saw that Alex was a little hesitant about some of our teachings… so, I reminded him that Jesus of Nazareth, son of God, was, in fact, ‘punk as fudge pie,'” said the youth pastor from his office. “That young man had frequent clashes with authority, an itinerant touring lifestyle, and a ‘crew’ of 12 disciples. It doesn’t get more punk than that.”

Additionally, McCabe told Freeman that if he’s “…looking for a friend who gets what you’re going through, and knows how hard it can be to ‘punk out’ with your ‘scene crew,’ I know somebody you can always talk to,” according to one witness who requested anonymity. Freeman allegedly stood, staring blankly, for 15 seconds before McCabe hurriedly added, “Jesus. I’m talking about Jesus — the guy we were literally just talking about.”

“I had a young man in here, a captain of his football team, who was starting to stray from the flock,” said McCabe. “But Jesus himself was like the quarterback of an underdog team of Christians. Even though the Romans were a bigger team, Jesus still got in the end zone for a field goal.”

Following his “rap sesh” with McCabe, Freeman admitted privately that some of the messages did have an effect on him.

“While it should be obvious to everyone that church is stupid and dumb, it was pretty cool when Pastor Doug said that the Book of Revelation had ‘…a real Blitzkrieg Bop at the end,’” said Freeman, trying to solicit alcohol outside of a 7-11. “Then he told me about when Jesus flipped over all of those tables in the temple — it’s almost like he was telling those guys that the only merch that matters is the love of God, and that cannot be sold.”

At press time, McCabe did confirm that, while it is not specifically discussed in the Gospels, it is unlikely that Jesus ever shredded a half-pipe.