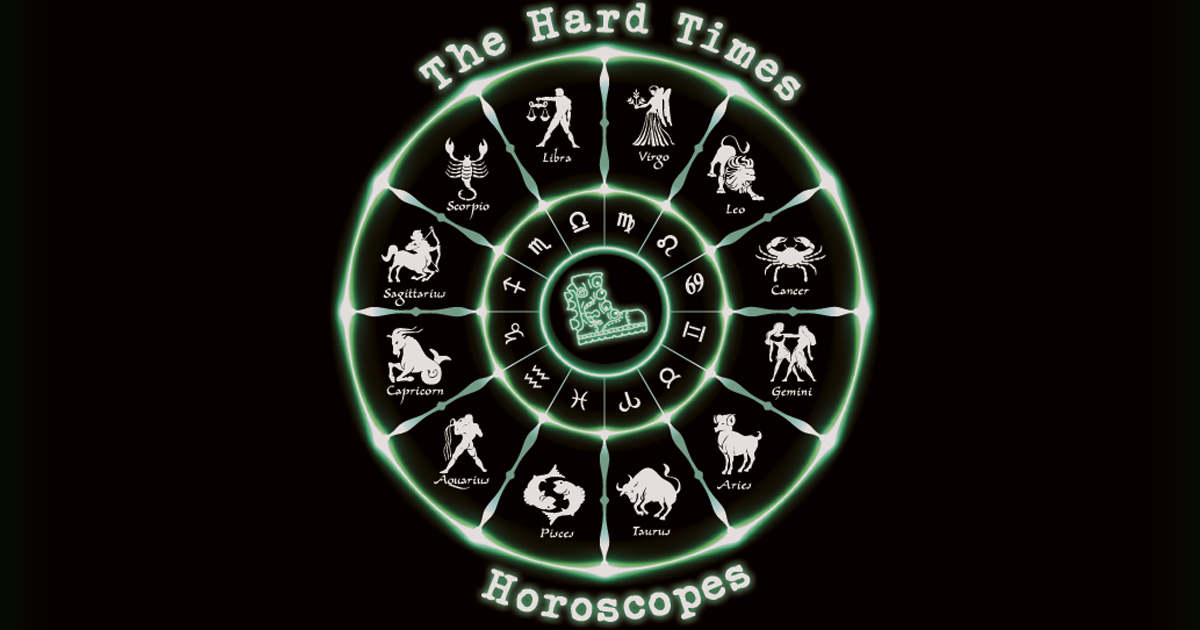 Aries (March 21-April 19)
As an Aries, it’s no secret that you can be a giant diva from time to time… and you know what? Fuck yeah! Take time this week to make sure everyone knows YOU have that Fire energy, and that YOU are in control. Don’t stop at just re-recording all your band’s guitar parts — rename the whole goddamn band!

Taurus (April 20-May 20)
More than likely, there’s someone in your inner circle trying to get closer to you. It may be a potential partner… but, more plausibly, it’s that asshole in the cut-offs trying to crowd-kill in the pit. Be confident in yourself, and you’ll be able to shove a full-grown man until he saunters over to the other side of the crowd with no problem.

Gemini (May 21-June 20)
The stars predict good fortune for you this month, Gemini! A windfall of drink tickets is coming your way — just don’t let it go to your head!

Cancer (June 21-July 22)
Resources will be extra tight this week, Cancer: the usual chips and salsa you earn at regular gigs may be cut back. But, it’s not all looking gloomy — you’ll find a truck stop with free plastic spoons around the 17th to shovel some extra salsa straight into your mouth.

Leo (July 23-August 22)
Is your natural wanderlust pulling you back out onto the road? Did your last tour lose so much money, you don’t know if you could survive another hit? Fear not, Leo — your girlfriend makes good money at the museum, and she’d love to front the cash needed to get you and the boys to Duluth! I mean, who else is gonna show those kids your innovative blend of hardcore and straight edge hardcore?

Virgo (August 23-September 22)
It’s time to treat yourself, dependable Virgo. Last week’s bender does NOT mean you need to go straight edge to redeem yourself. Keep the party rolling, and don’t pay any attention to those Alcoholics Anonymous pamphlets that keep mysteriously showing up under your bedroom door. They probably keep ending up there by accident, anyway.

Libra (September 23-October 22)
As a Libra, you have a passion for art and culture… so stop hiding it! Share it with the world by loudly letting everyone around you know exactly how much you think the band currently on stage “fucking sucks.”

Scorpio (October 23-November 21)
Hate to say it, Scorpio, but we’ve been talking, and… well, you’ve been kind of a dick lately. Even that shitty promoter no one can stand agrees. So while the new moon next week will affect you in a major way, we won’t waste our breath, because we know you won’t take whatever advice we have for you anyway.

Sagittarius (November 22-December 21)
This is a good day to color outside the lines, Sagittarius! Pair a bullet belt with some Hurley board shorts — who gives a fuck? Your creativity sector is lit up like a punk house on a bedbug registry, and the stars are screaming for you to innovate! The world has been waiting for a crust punk surfer, and you’re going to show them what they’ve been missing. Be careful not to fall in the water, though: bullet belts rust.

Capricorn (December 22-January 19)
The Capricorn symbol is the Mountain Goat… but you already knew that, didn’t you, you smartass? As a careful, introspective sign, it’s likely you’re also a fan of The Mountain Goats, but how would anyone know? It’s not like you’re constantly bringing it up or anything.

Aquarius (January 20-February 18)
You’re probably pretty used to being the free-thinking, creative visionary who often doesn’t get the recognition they deserve… which is a good thing, because that’s exactly what will happen when you debut your fart-themed Cure parody band. Some day “Flatulation Street” will get the respect it’s due — just not in your lifetime.

Pisces (February 19-March 20)
Shoot for the stars this week, Pisces! Like, literally — you should actually attempt to assassinate as many punk legends as possible. Sure, Bill Stevenson never did nothin’ wrong to nobody, but think of the stories people would tell. Local legend status? Sealed!