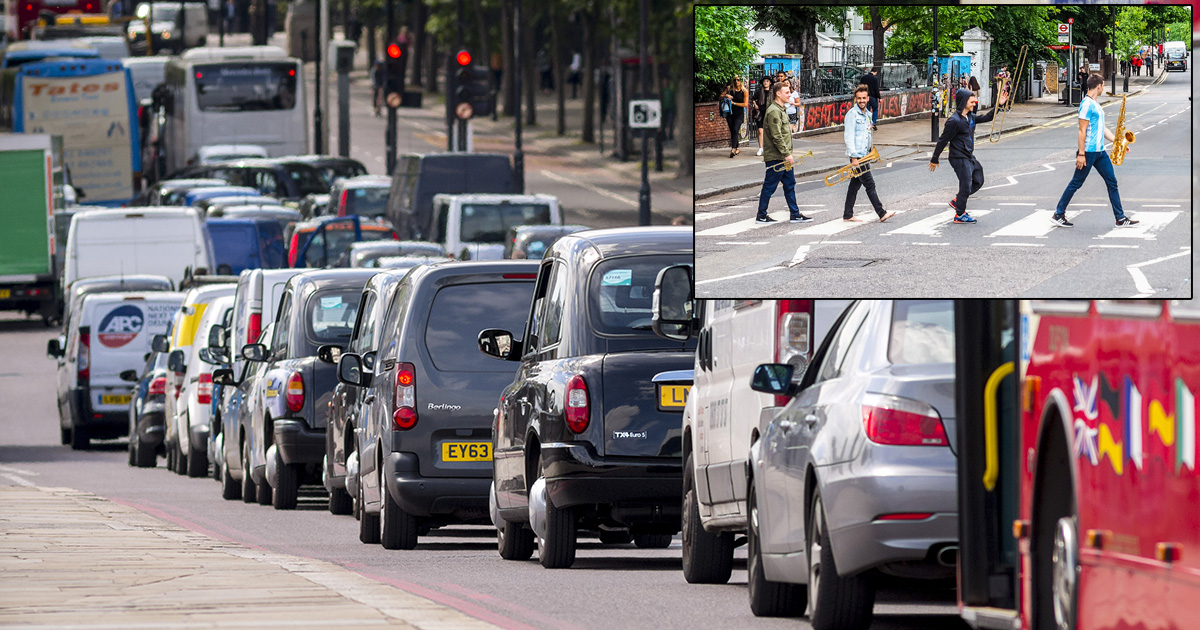 “A lot of people probably won’t get this, but the Beatles have actually been a pretty big influence on us. So while we’re here on our first UK tour we figured why not do a silly little thing and get a nice picture. I know it’s kinda touristy but once we figure out how to fit our third tuba player in there it’s gonna look awesome,” said guitarist Kenny Rellit, apparently unaware of the utter bedlam being caused by the band. “Yeah, it’s taking a little longer than expected to get the shot, but no worries. We won’t quit until we make the shot happen, we checked Google Maps and there is a pretty big holdup on the roads around here for some reason so our gig is probably gonna start late anyway. It’s kinda nice how that just worked out.”

Motorist Chelsea Froomstell detailed her experience in the gridlocked traffic.

“I don’t know how much more of this I can take. I’ve been emptying out and reusing the same pee bottle for six days now,” explained a visibly frayed Froomstell. “I was just trying to pick up my kid from daycare, but now I can’t be sure I haven’t slipped into some purgatorial alternate dimension where I’m doomed to melt into my car seat. Is any of this real? And, if I don’t make it out, will the daycare consider adopting Skyler? I’m afraid he’s already forgotten about me.”

“I’ve been tending this zebra crossing since back when the fab four first snapped the album cover and in the process pissed off the entire passengry of that double-decker bus they held up,” said Oliver, over a cacophony of increasingly irate sounding car horns. “Now the chaps in this latest band, they got a few more trumpets and triangle players than I usually see, but I’ll keep these autos out of the walk until they get their photo. I just hope they figure it out soon. I don’t know how much longer I have left on this mortal coil.”

At press time, Big Potatoes members enlisted Oliver to actually take the photo, and had begun the arduous process of explaining to the nonagenarian how an iPhone works.