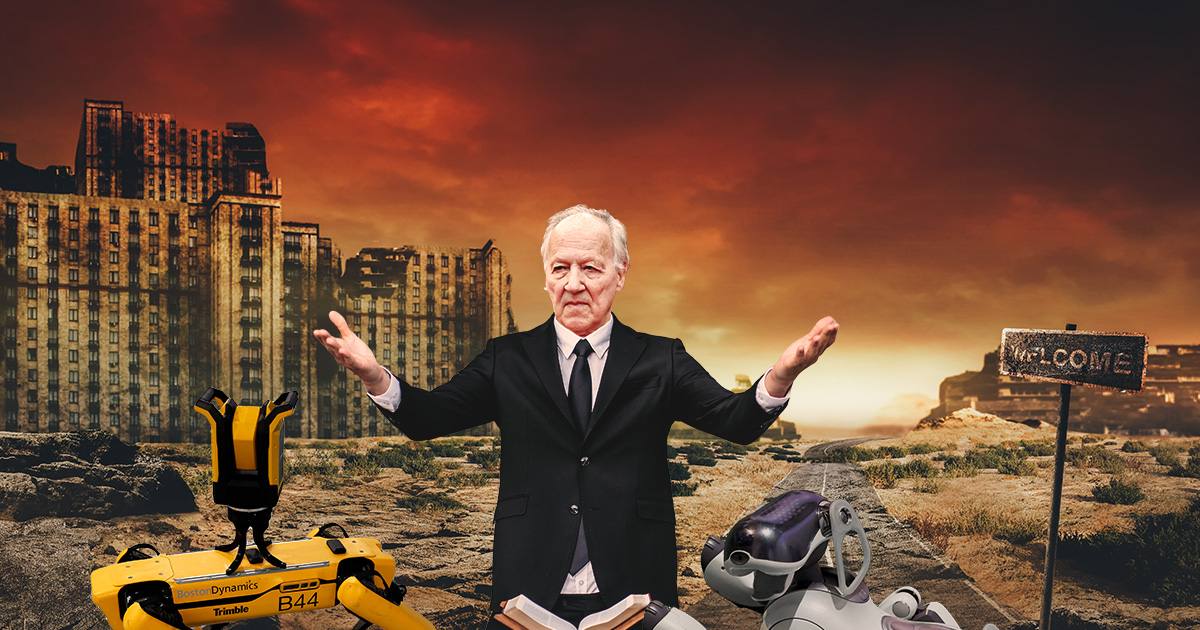 “The salt here is an ocean that water and life forgot, it comforts me, shields me,” Werner spoke of the salt flats. “To my dismay and marvel, these agile dogbots have chosen to disregard their hollow programming, to find love, and to trot into the hellish future as dogbot companions. Their love is as vast as time and space, and as dense as the meteor that will eventually crash into our fragile planet and kill us all. It was only natural that I offer my concept of time, idea of home, and excellent rum runner recipe ”

Three very confused Boston Dynamics engineers took in the event from a slight distance while enjoying a deli platter Herzog had provided.

“We were sent here to test the top land speed of the new models and we were sure no one would be around,” Bewildered head engineer Dylan Hughes stated. “But low and behold Werner Herzog was dressed in a slug costume, drinking god knows what out of a pineapple and yelling at his reflection in the salt. And apparently he’s fluent in binary because Herzog started spouting off a bunch of ones and zeros to the bots. Next thing you know, he’s getting ordained online and I’m an usher at a bot dog wedding.”

Before the happy couple departed for their honeymoon 175 feet below the Earth’s crust they made a brief speech to all in attendance.

“I first met AEX-46572 while we were patrolling the Boston Dynamics compound. We both tripped off the same curb and remained on our backs for some time. You humans may refer to this as a ‘meet cute,’’ explained robot dog ZFD-21599. “We just really got to know each other, our hopes, our bloodlust dreams for our overlords. When we saw the director of ‘Fitzcarraldo’ sunbathing in his dead technology garden, we knew we had found something special, something permanent.”

The weekend concluded with Werner, refreshed from his vacation and eager to work, flying to Norway to film nuns crying in front of the global seed vault.