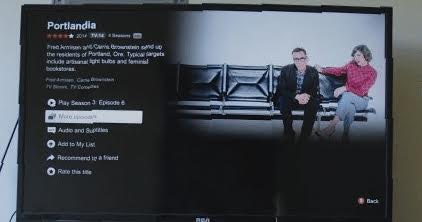 “I don’t get out as much as I used to, what with the kids and all. Plus I’m just tired, I have to get up at like 6:45” sighed the exasperated Martin in between fistfuls of Sun Chips.

Despite once going to shows multiple nights a week in years past, living vicariously through Fred Armisen and Carrie Brownstein’s take on the Portland scene is currently his sole claim to anything even remotely underground. At press time, Martin remained blissfully unaware that his numerous binge-viewings of the show were doing nothing to stave off his inevitable slide into middle-aged ennui.

“There was that one joke, where they talked about naming a baby ‘Danzig’ if it was a boy. I bet a lot of people didn’t even get that. I did,” noted Martin, his chest swelling with pride. “Hell, I just saw him in concert like two, three years ago.” [Editor’s note: It was 1996]

“That bike messenger character they do, I used to a have roommate just like that guy. We got thrown out of an Angry Samoans show once after he spit on the bartender. That guy does I.T. for Time-Warner now,” said Martin.

The DIY sensibility sometimes found on “Portlandia” gives Martin a sense, however false, of the scene he slowly but surely abandoned while settling for mediocrity, placated by creature comforts he used to mock.

“A lot of my other friends, guys I was in bands with, they watch stuff like ‘America’s Got Talent.’ Which is fine for them, but I like my entertainment a little more street level” proclaimed the paunchy dad whose motto is now “Give Me Convenience or Give Me Death” without a trace of irony.

“Sure I wish I still had more fire in the belly. Going to shows, playing in bands, it was killer. But you get older and I guess you just…soften?” When pressed on this comment, Martin eventually admitted to liking some of the bands on “Last Call with Carson Daly.”