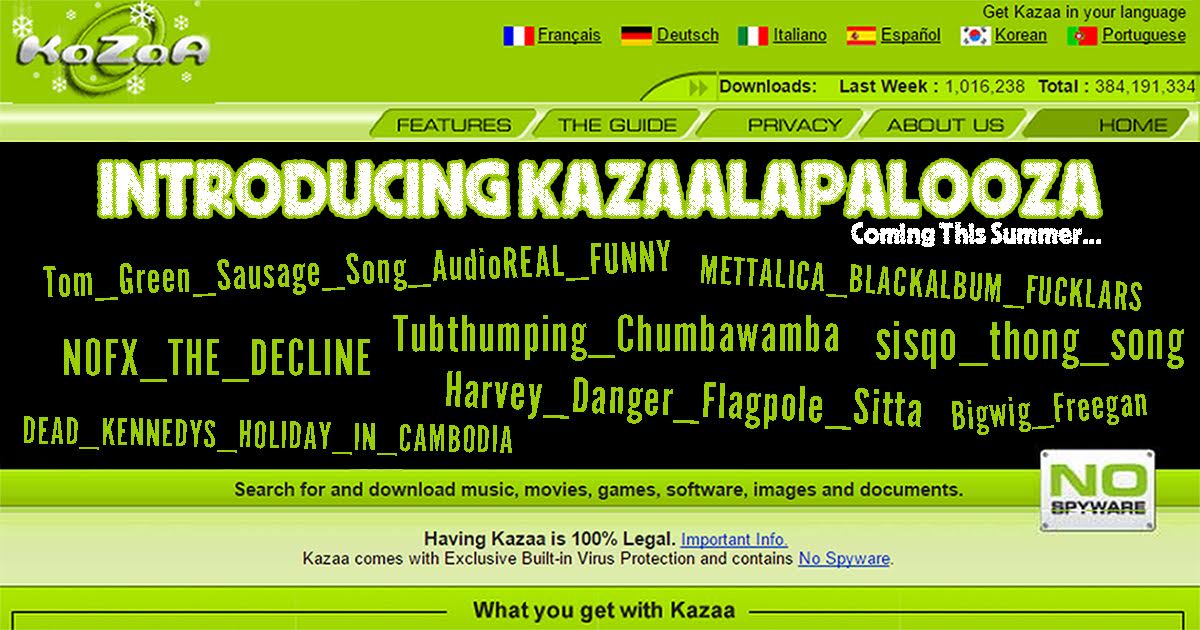 “We wanted a festival that would let people relive the fun of illegally downloading a song and adding it to your music library,” said CEO Nikki Hemming. “Tom Green and the sausage song have been a staple of our platform for years, and we are super excited to play files with that name for over an hour. There’s no telling what you will get — it could be a 16-second clip from ‘Freddy Got Fingered,’ it could be a mislabeled Destiny’s Child song, it could even be a video of someone falling in front of a train and being killed. That is what is so exciting about Kazaalapalooza.”

Fans of the file transfer platform were excited at the prospects of seeing some of their favorite files live.

“This lineup is absolutely stacked with heavy hitters. Tom Green ‘Sausage Song’ is a no brainer — maybe they’ll even do an encore with ‘The Bum Bum Song’ — but I don’t want to get my hopes up,” said ticket holder Reece Young. “I’m also excited to see ‘Afroman-BecauseIGotHigh,’ ‘House of Pain Jump Around- Van Halen,’ and one of my all time favorites, ‘HouseMusic_Techno_DanceRemixxx.’ I got in contact with some of my old file transfer friends like DonDaPimp and JerryCamaroDrvr, and they said they’ll be there. It’s going to be great to have the ‘Excellent Integrity’ crew back together.”

Lawyers for record labels around the world are also excited by the festival announcement.

“Some of my favorite cease and desist letters were sent to Kazaa, so it’ll be great to take a trip down memory lane and watch some nerds sweat as we threaten them with jail time for pirating the work of my clients,” said copyright lawyer Angela Waterson. “I also look forward to getting the name and address of everyone attending the fest, so I can give them a good scare with a demand stating that they’ll need to pay $100,000 in damages and face two years in jail for downloading a 311 song.”

Early reports indicate that everyone who downloaded tickets to the fest infected their computers with a virus and will have a hell of a time explaining that to their parents.