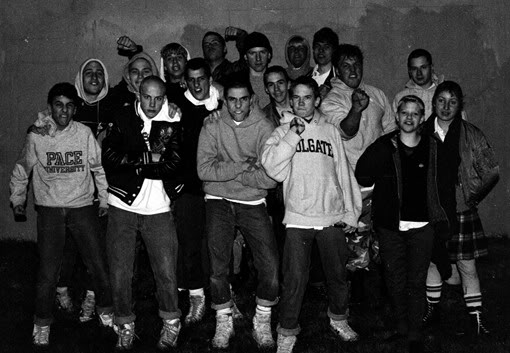 RENO, Nev. – In a tale that seems to be as old as time itself, local teenager Micah Hoff has expressed his continued embarrassment at the hands of his hardcore family.

“I know in hardcore the scene is a family, but my friends keep fucking shit up for me. Just the other night, my band was playing a show with, like, these really cool older dudes from Reno, and my friends all came wearing my band’s shirt. Ugh, that’s so embarrassing. Just wear some other t-shirt. Come on, dude,” Hoff said about his friends’ choice of wardrobe at a recent show.

Psychologist Julia Chow has studied teenage development her entire career and says this is not out of the ordinary. “Micah is trying to find himself, and sometimes a hardcore family can really get in the way. They have their traditions – like where they want to eat after shows, and a variety of handshakes. Sometimes that can be tough for a teenager to handle.”

Hoff’s friends believe he is just going through a phase, and this is typical behavior for a teenager his age.

When asked about the t-shirt incident, Hoff’s friend Jeremy Lancaster defended their style choice. “We love seeing Micah up there having fun; we are really proud of him. We just wanted to show our support, so we wore the shirts and danced a lot during his band.”

“Oh, and the dancing – they were the only people moving around to my band. It was so embarrassing seeing them acting like that in front of everyone. They are ruining my life,” Hoff said. He then quietly murmured, “When I’m 18, I am so out dropping out of the scene.”