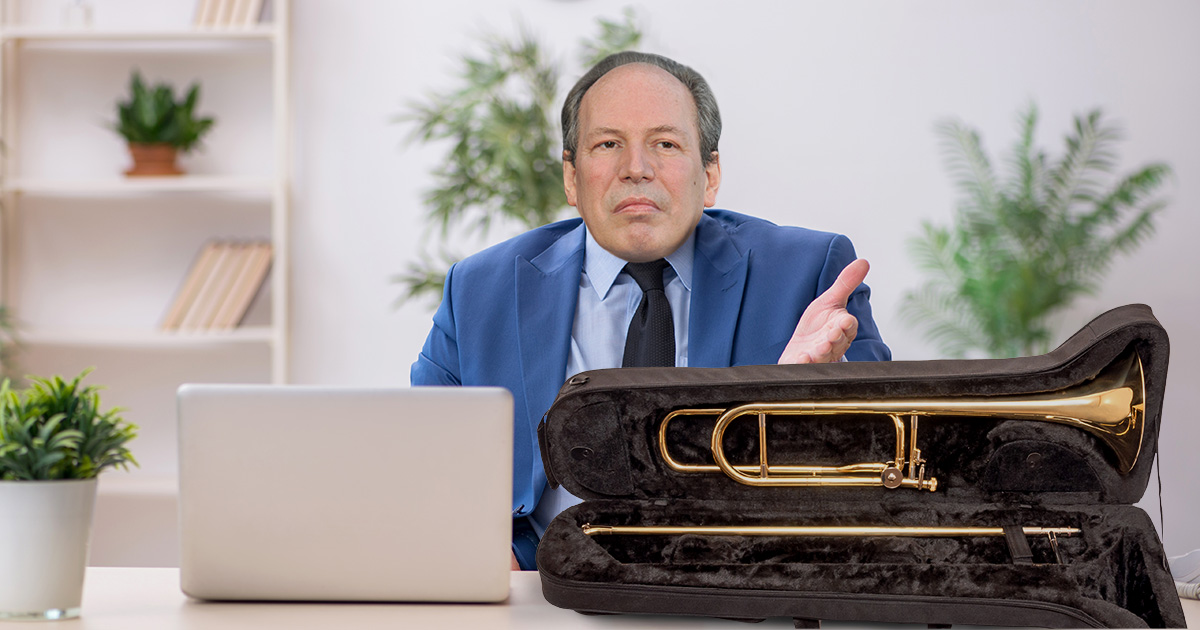 “It’s been my dream to record a ska album, but it seems like every year I get hired to compose for some dumbass movie,” said Zimmer. “Ska is why I got into music in the first place. Composing for Hollywood blockbusters is just a day job. Every time I finish a movie I think ‘now I finally have time to start the album,’ but then I’ll get an email saying ‘Hey Hans, we need you to do another ‘Pirates of the Caribbean’ movie.’ It sucks. I just want to dance and play the trombone in a band with twenty guys like any other Academy Award-winning composer.”

“I’d tell him how I want the music to sound and he’d nod, but it was obvious his mind was elsewhere,” said Villeneuve. “This giant CGI sandworm cost millions and took 8,000 man-hours to animate, and he scored it with upbeat trumpets? We only had a couple days to record an entire new soundtrack, so Hans recorded himself singing in the shower and added a ton of reverb. Surprisingly, that new soundtrack is on track to win an Oscar. I still won’t be working with him again.”

Despite criticism from collaborators, Zimmer has shared demos of the album in works with his colleagues to great delight.

“Zimmer’s shit fucking rips, dude,” said ‘Star Wars’ composer John Williams. “Less Than Jake? Goldfinger? Reel Big Fish? Those motherfuckers can’t hold a candle to some of the demos that the Hansmeister has shown me. It’s a shame he hasn’t had a chance to finish the songs, but I know how it goes. My two-piece slam metal band “Shitfuck” had an EP in the works, but then Disney bought Star Wars and I had to compose for all those dumb new movies. Sure the new trilogy is over, but now I have to wait until my drummer finishes his community service hours to work on the songs again.”

At press time, sources reported seeing Zimmer try to convince Ridley Scott to let him put a trumpet breakdown in the ‘Gladiator 2’ soundtrack.