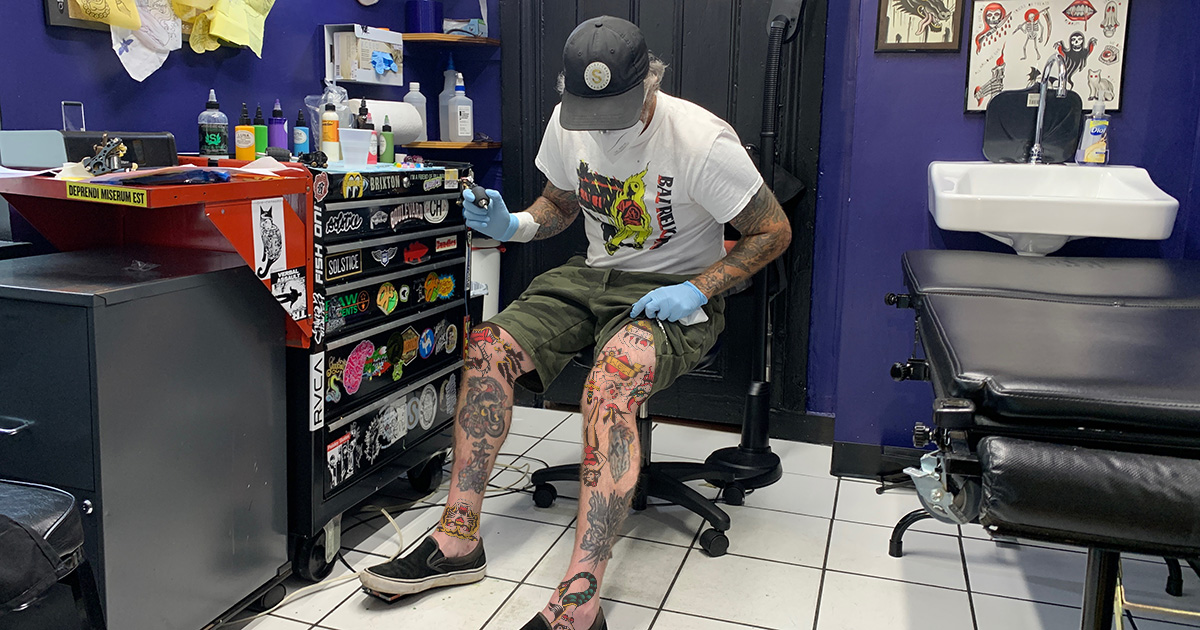 “I got bored and just started fucking around on my upper thigh. I wanted to cover up some of the terrible tattoos I gave myself when I first started out, and then I guess I got carried away,” said Lussier. “It got really tricky when I had to do the back of my thighs: I had to set up two mirrors, and then go off the reflection of the reflection so the tattoo wouldn’t be backward — that would’ve looked really dumb. I never expected to go below past my knees, but here we are.”

“Doing all this work on myself did make me realize something important: it helps to wet the paper towel before wiping away the excess ink,” added Lussier. “Turns out doing it with a dry towel sort of sucks. I’m surprised nobody ever complained before.”

To his credit, those closest to Lussier say the new tattoos are some of his best work.

“He did a scene from ‘Lord of the Rings’ on his right leg that is truly epic. The only problem is that you have to be standing behind him while he’s sitting in his underwear and looking over his shoulder to see it properly,” said longtime friend Artie Landers. “I don’t know if I should tell him that the satanic piece with all the upside down crosses on his left leg just looks like a bunch of regular crucifixes to anyone other than him — but it would look totally sick if someone saw it on him while he was doing a handstand.”

Other tattoo artists across the country noted similar struggles to stay busy.

“The only spot I have open is my back, and it’s been hard as hell for me to reach back there,” said Los Angeles-based artist Heather Benson. “I’ve tried my best, but I’ve only been able to manage to scratch a couple of lines onto my shoulder blade, and I dropped my machine a few times and it hit my lower back and made some dots. I tried taping the machine to the wall and then moving my body, but since I can’t see what’s going on back there, it just becomes a bloody mess.”

In other body modification news, a furloughed Claire’s employee’s ear completely ripped off yesterday from the weight of adding an additional 200 piercings and earrings.