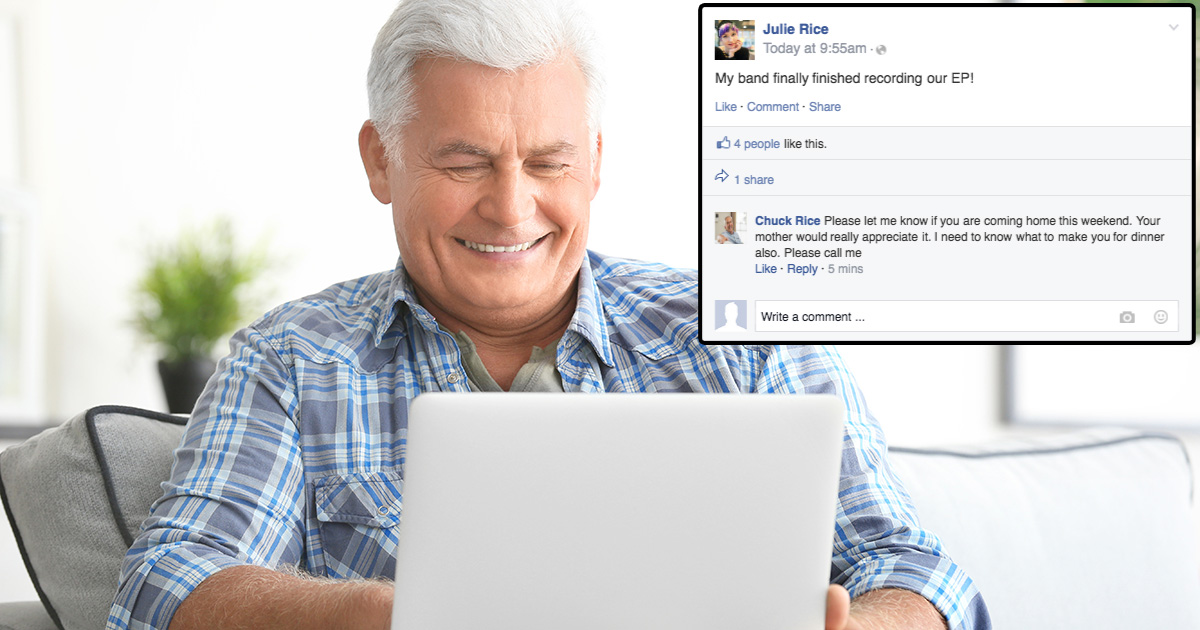 NORMAN, Okla. — A Facebook status update posted by Haute Sauce guitarist Julie Rice was hijacked today when her father “totally steamrolled” the comments section asking if she was planning to come home for Mother’s Day, sources who have since turned off notifications confirmed.

“My band finally finished recording our EP — which we’re all super psyched about — so I just made a quick announcement on Facebook,” Rice said. “And within the hour, there were, like, 13 comments in a row from my dad, asking if I was coming home this weekend.”

“He tried tagging my brother Steve in one, but tagged and somehow accidentally ‘liked’ some auto repair shop in Florida called Steve’s,” she added, “which ended up being a whole other fucking thing.”

Rice’s father Chuck admitted his excessive posting of comments was a concerted effort to steer the conversation toward his own liking.

“The family hasn’t gotten together since Christmas, and I needed to know if Jules was planning on coming home… because her mother would really appreciate a visit,” Chuck explained. “I just hope she knows to steer clear of the highway — I know it’s usually faster, but they’re planning work and it’ll be down to one lane with all that holiday traffic. It might be a giant headache..”

“Also, we’re all planning on having ham, but she got real sick on ham once when she was a kid,” he added. “So if she’s coming, we can get some chicken.”

Several others who commented before Rice’s father were subject to the rants as well — including Facebook friend Katie Lou Ray, who stepped in to confront the man.

“It’s tough when you’re faced with that moment of, like… should I jump in and comment something? Like, tell him to fuck off or whatever? I mean, I know it’s Julie’s dad, but there’s a time and a place for that,” Ray said. “I know some people are calling me a ‘hero’ or whatever, but I don’t think of myself as one. I just did what anyone else who gets unreasonably irritated by post notifications would do in that situation.”