Sobbing Eric Trump Chokes Down Seventh Can of Goya Beans 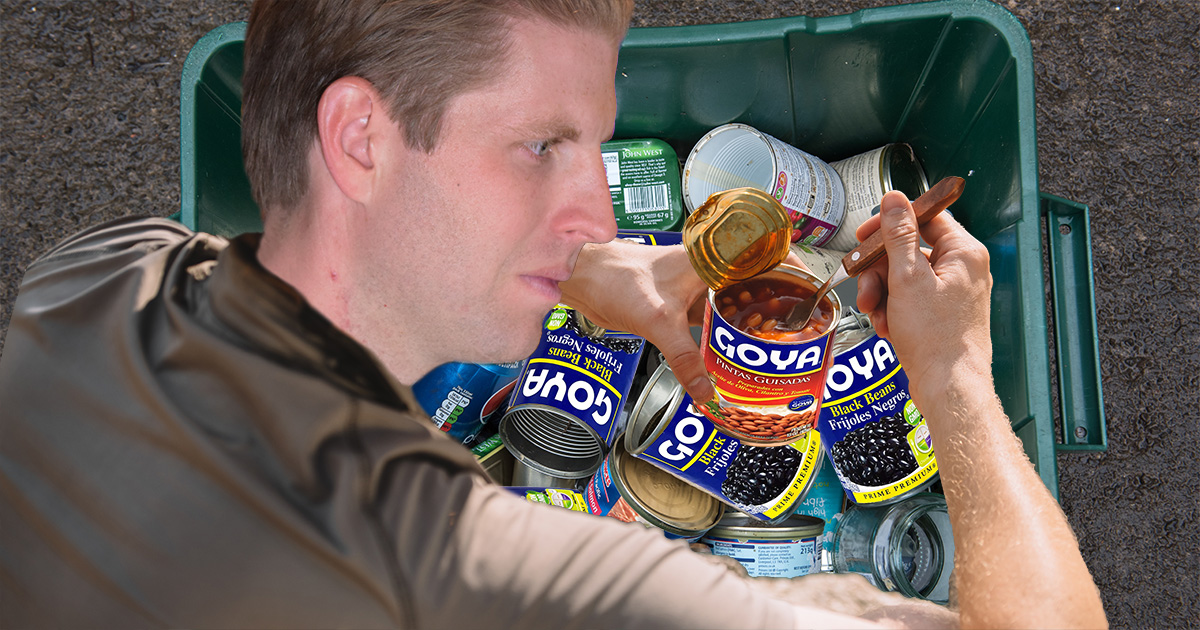 WASHINGTON — A broken and sobbing Eric Trump choked down a seventh consecutive can of Goya beans this morning after a week of publicly binging the brand’s products to garner support from his father, President Donald Trump, disgusted witnesses confirmed.

“Daddy said he loves Goya beans more than he loves anything else. Maybe if I became more Goya than boy, he’ll at least love me more than Don Jr.,” said Eric Trump, slowly maneuvering a shaking spoon of wet beans to his trembling lips. “I’ve used all the empty cans to build statues of my dad, but he still doesn’t notice. I’m going to eat 18 cans today so I can use the empties to make a whole minigolf course — then, maybe, he’ll finally play with me.”

Although experts differ on what does or does not garner President Trump’s affection, most medical professionals agree eating more than a handful of beans a day can be hazardous to your health.

“Look, I don’t have a firm number, but just eat, like, a normal amount of beans. If you try to eat a fuckload of beans, your stomach will explode,” said Dr. Kendrick Joh. “Every week, I’m interviewed about how many beans a human can safely eat, or how much bleach they could safely inject, or how long an erection can safely last while watching Ivanka hold a can of beans. Just stop it. If the President says or does something, just do the opposite. You’ll live longer.”

While Trump continues to publicly support Goya beans, he maintains it is just one way to truly support American freedom and democracy.

“Do I love beans? Of course — beans are the best and most musical fruit, and believe me, I’m great at making bean music. Some of the best music you’ve ever heard — very great music,” said President Trump, winging a can of kidney beans at a protestor outside the White House fence. “And that’s the thing: the media is really the true enemy of beans. Everybody says, ‘Oh, beans are fine, beans can take care of themselves,’ but that’s not true, I know that’s not true, because I’m also persecuted just as much as beans. More than beans, probably. More than beans have ever been persecuted in this country is how much I’ve been persecuted, and it’s a big problem.”

At press time, President Trump was telling supporters at a rally that true Americans stuff lit firecrackers up their asses, soon after which a pantsless Eric Trump was seen backstage clumsily lighting six M-80s with his aquafaba-stained hands.