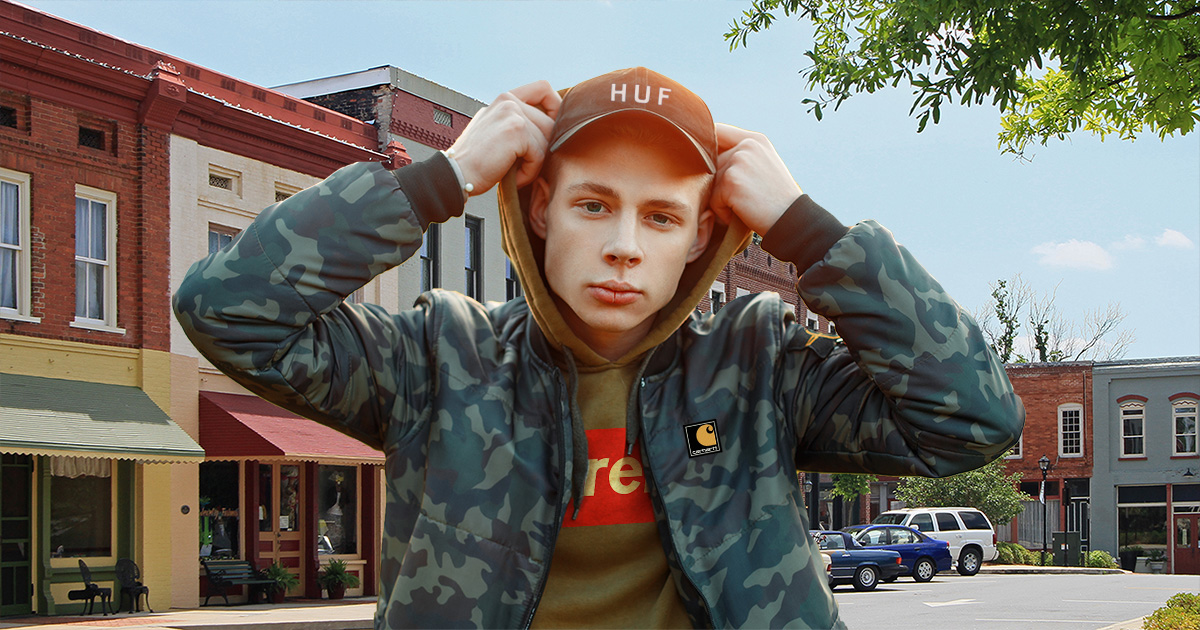 ROKEBY, Neb. — Residents of a sleepy Nebraska town are living in fear of a teenager who recently transformed into a full-on hypebeast who will stop at nothing to wear the latest styles, multiple sources confirmed.

“This town doesn’t get much in the way of crime — everyone tends to keep to themselves. But one day, I started noticing ‘Supreme’ stickers stuck to the stop signs… and I started to suspect trouble was brewing. We haven’t seen such flagrant vandalism since the ’90s,” said Sheriff Wayne Haskell. “I also found suspicious ‘Air Jordan’ footprints around town, which is a far cry from the normal work- and cowboy-boot tracks we’re used to.”

Townsfolk openly speculated about where the supposed hypebeast originated.

“Well, rumor has it John and Marsha White recently visited Los Angeles with their son, Jack, and I’m told young Jack was bitten on the shoulder by a rabid HUF employee and showed symptoms of hypebeastism later that night,” said town historian Clyde Maxwell. “He threw out all his dungarees and refused to wear anything other than brands like BAPE, or 10 Deep. Very sad. He was always a nice boy, but the effects were nearly immediate… and now, his Instagram presence is very annoying.”

The mythical hypebeast is normally found in suburban communities outside of major coastal cities, with no reports of any in landlocked states until now.

“The standard hypebeast likes to keep their clothing as ‘fresh’ as possible, so they normally only appear in public when there is a limited release of a new beanie or something at a pop-up shop in a nearby major city. To find one in a dusty Nebraska town is highly unorthodox,” said streetwear expert Adam Luen.

“The people of Rokeby should not approach the hypebeast at any point, and should certainly not compliment his clothing,” Luen warned. “This will only lead to conversations so boring you will pray for the sweet release of death in order to escape.”

Residents are instructed to contact police if they notice any unauthorized Karmaloop purchases on their computers.