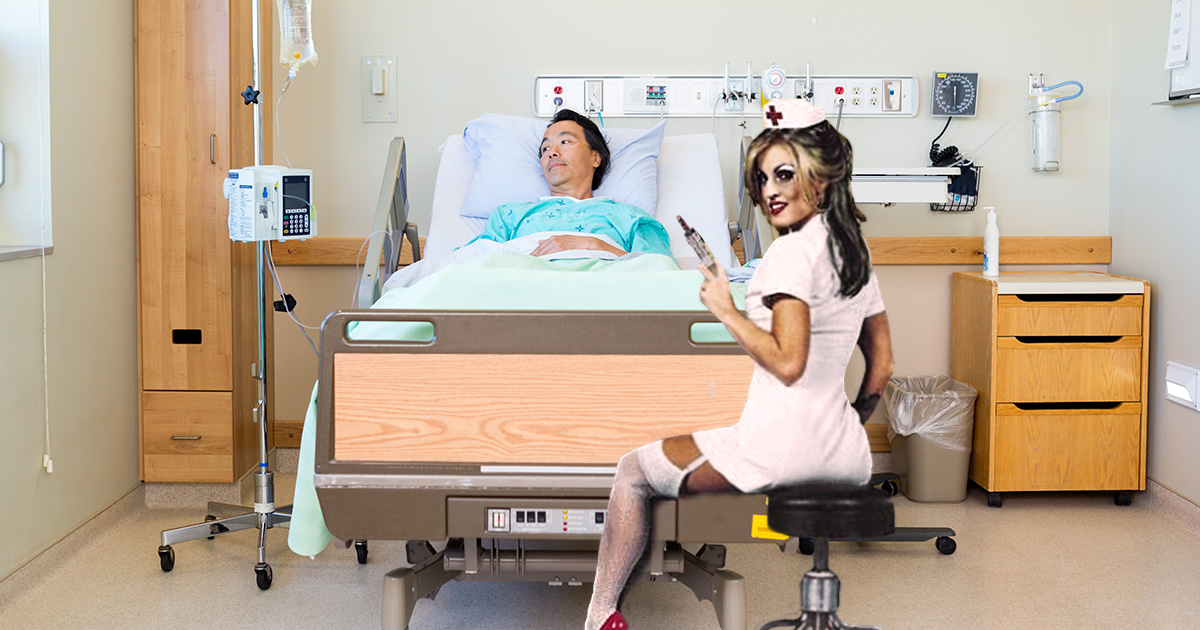 “We are very excited to have Ms. Lindemulder as part of our team, and our staff is dedicated to the health and well-being of all Californians,” said chief executive officer Karla Gaines. “Honestly, we didn’t have a chance to run a background check — she just played us the ‘What’s My Age Again’ music video on her phone and said she could start tomorrow. We offered her some scrubs and protective equipment, but she insisted her old uniform still fits and she’s more comfortable that way.”

Lindemulder admitted the job is a bit more intense than she imagined.

“I’ve seen a lot in my day: I’ve played a nurse in multiple adult videos, and when I worked with the Blink guys I was watching a lot of ‘ER’ to get into character. I thought I knew what to expect, but this isn’t fun,” said Lindemulder after a 22-hour shift. “I thought being a nurse was just dealing with three dudes making fart jokes all the time, but there are people actually dying here. A woman came in earlier today having trouble breathing, and her husband stood outside her window all night to try to comfort her. She passed when he went to get a coffee, and when he came back, his cries of agony were so loud they set off car alarms. That wasn’t very funny at all.”

Hospitals across the country have resorted to similar measures to pad their staff in this time of need.

“Damn, we wish we had Janine. At least she has gloves. We had to hire a guy who cosplays as Heath Ledger’s version of the Joker in that one scene from ‘The Dark Knight,’ but the guy never breaks character. It’s annoying as hell,” said Tallahassee Memorial Hospital administrator Edward Hawk. “Right now we’re doing our best to recruit muay thai legend Phil Nurse just for the hell of it. I mean, he can’t be any worse than what we already have.”

At press time, background actors from “House,” “Scrubs,” and “Doogie Howser M.D.” were all being actively recruited for immediate positions.