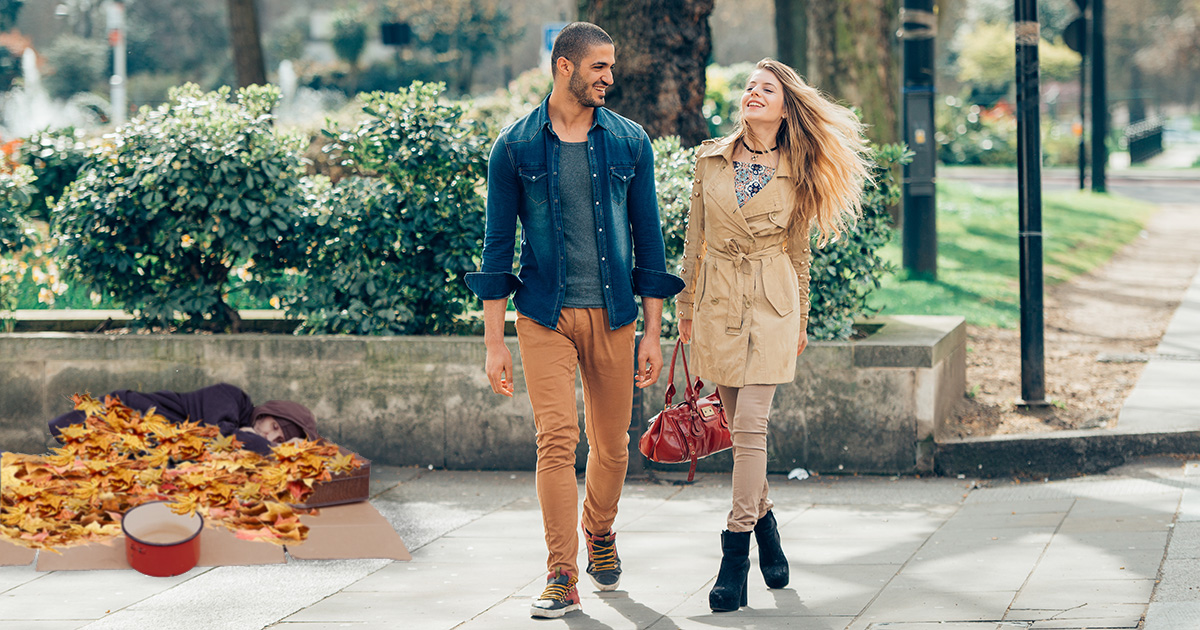 SAN FRANCISCO — A young San Franciscan couple enjoyed the beginnings of autumn this weekend, relishing the sight of a homeless person in the Mission district covered in a dazzling plumage of orange, yellow, and magenta leaves, confirmed a woman passing by on a rented scooter.

“This is, hands down, my favorite time of the year,” noted Google employee Allegra Yates. “When my fiancé Digby [Howard] and I strolled past that homeless man and his vibrant kaleidoscope of fall leaves, it struck me that during these few precious months, even the most repellent of gross stuff can exude beauty if you look for it.”

Soon after the couple moved along, a man riding a recumbent bicycle halted swiftly to view the leaf-covered man.

“Usually nothing stops me on my daily trek from my luxury condo over to Starbucks for a heavenly maple pecan sandie and a snickerdoodle-infused, pumpkin spiced latte with almond milk… but sometimes, you have to take time to enjoy the little gifts nature gives us,” prattled local gluten-free restaurant magnate Barnaby Radcliffe. “And the way the light dances off of the leaves and onto his urine-soaked sweatpants is sublime. I may just forget the latte and grab my canvas and pencils for a late morning sketch.”

“I miss the ’80s, when people would just walk past and ignore me,” lamented homeless veteran George Nelson. “Now all they do is bother me and ask to pose with me for pictures because they like how the leaves look. Someone actually told me, ‘I’m jealous of the life you chose. It’s so courageous.’ Then they didn’t even pay me for posing with them! Cheap yuppie assholes.”

Later, a parade of young professionals stopped to gawk at the man veiled in a blanket of richly-hued leaves, ignoring the hat the man set out for money and instead handing him coupons for a local bakery, along with paper bags to replace his plastic ones.