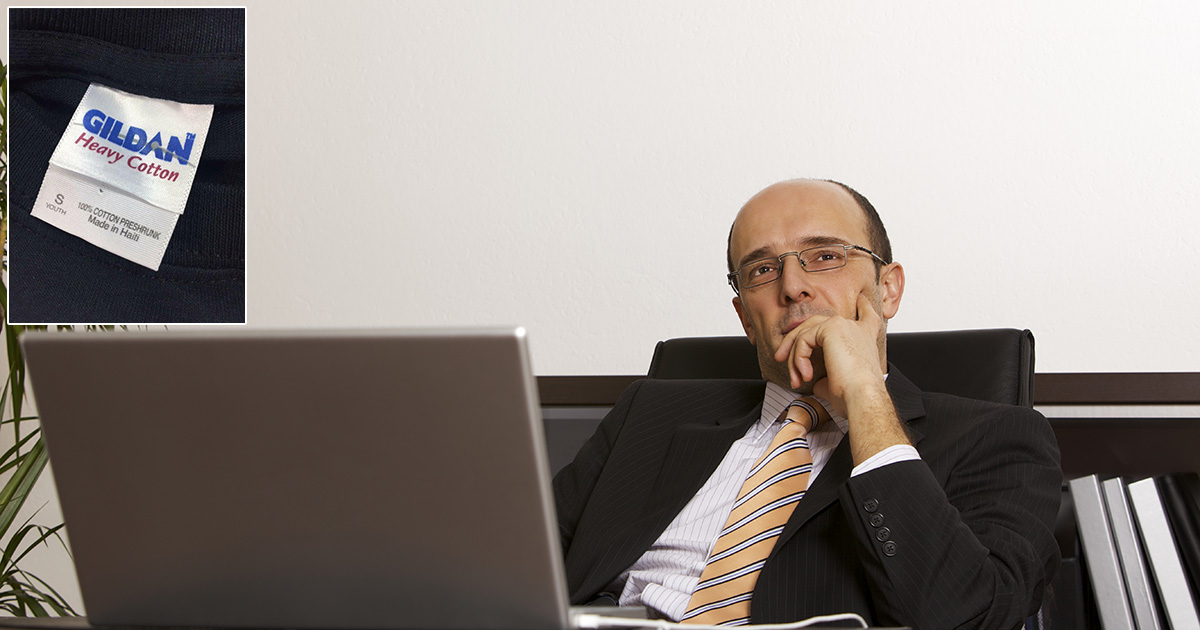 MONTREAL – President, CEO, and co-founder of Gildan Athletic Wear, Glenn Chamandy, recently made the controversial decision to include a third extra scratchy tag to the brand’s already despised line of t-shirts, annoyed consumers from across the globe confirmed.

“The decision is totally in line with Gildan’s corporate mission and philosophy to provide the least aesthetically pleasing, most uncomfortable garments that are legal to sell as clothing,” said Chamandy from his penthouse office at Gildan Headquarters. “The best part is that the new tag only displays information about how flammable the tag itself is, which is very, very flammable. Much more so than the original two. We had scientists from around the world come together to make a tag so annoying that it drove four of our shirt testers insane. It’s also impervious to scissors, so don’t even try to cut it off.”

Ronnie Dobbs, an avid concertgoer, will no longer buy merch if printed on Gildan t-shirts.

“The last Gildan shirt I bought was at a High On Fire show and that was the last straw,” Dobbs said. “I put it on at home and it was somehow wider in the chest than it was at the bottom, which barely made it past my belly button. I had to go to a dermatologist to look at the rash I got from that new tag they use too. It’s bad enough bands are charging 45 bucks for shirts now, the least they could do is not print them on what feels like recycled burlap.”

Fashion expert Martina Jordan weighed in on Gildan’s use of low-grade materials in clothing manufacturing.

“One of the most fundamental considerations in fashion is the way a piece of clothing fits on a body, so it is crucial to find clothes that accentuate your specific dimensions,” said Jordan. “They also need to feel good while wearing. This will give you not only comfort but confidence too. However, these shirts from Gildan do absolutely none of those things. And the excess tags are just an insult. The only thing I would dress in one of these is a gaping wound, and that’s only if I couldn’t find any gauze first.”

At press time, Chamandy announced that all future t-shirts will use a new hybrid acrylic/polyester blend called acrylyester, which combines the most uncomfortable elements from both fabrics.