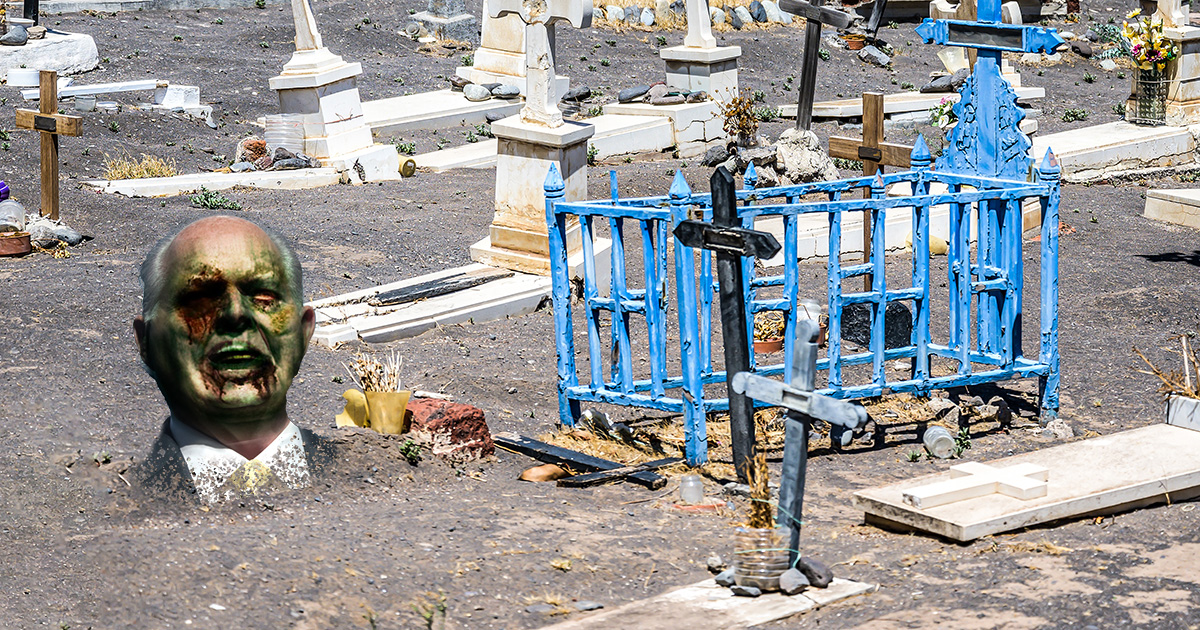 “Aside from the yellow eyes, he honestly seems the same, if not even a little more tolerant and kind than the man we buried,” said podcaster Joe Rogan, brushing the residual dirt from Limbaugh’s suit jacket. “I was a little nervous to bury him in there after the townspeople said he’d come back a violent, unfeeling monster, but so far we’ve observed no change in his personality.”

Ludlow residents have long-feared the ancient burial ground after learning of its mysterious ability to reanimate the dead into demonic versions of their former selves, but Limbaugh’s fans could not be deterred by warnings from locals.

“Ayuh, I tried to tell Limbaugh’s people that the ground up there is funny,” said local farmer Gus Bennett. “I told them that sometimes what you put into the soil… ain’t always what you get back. Man is only man for so long before he becomes a monster. I thought I was getting through to them, but then they asked me if I was Antifa and walked away chanting ‘U-S-A.’”

Limbaugh emerged from his shallow grave two weeks after being buried by fans, including household names like Ann Coulter, Rand Paul, and Ariel Pink.

“As a pro-lifer, I couldn’t take death lying down,” said Limbaugh from behind a cloud of cigar smoke. “How could my spirit concede to the afterlife knowing that the fight for unequal rights was ongoing? As long as homelessness, Michael J. Fox, and San Francisco exist, I will be there to make fun of them. I even plan on buying plots for my whole family, and maybe Glenn Beck if he’s lucky.”

Still believing himself to be president, former Pres. Donald J. Trump has since announced his plans to award the resurrected Limbaugh with a second medal of freedom.