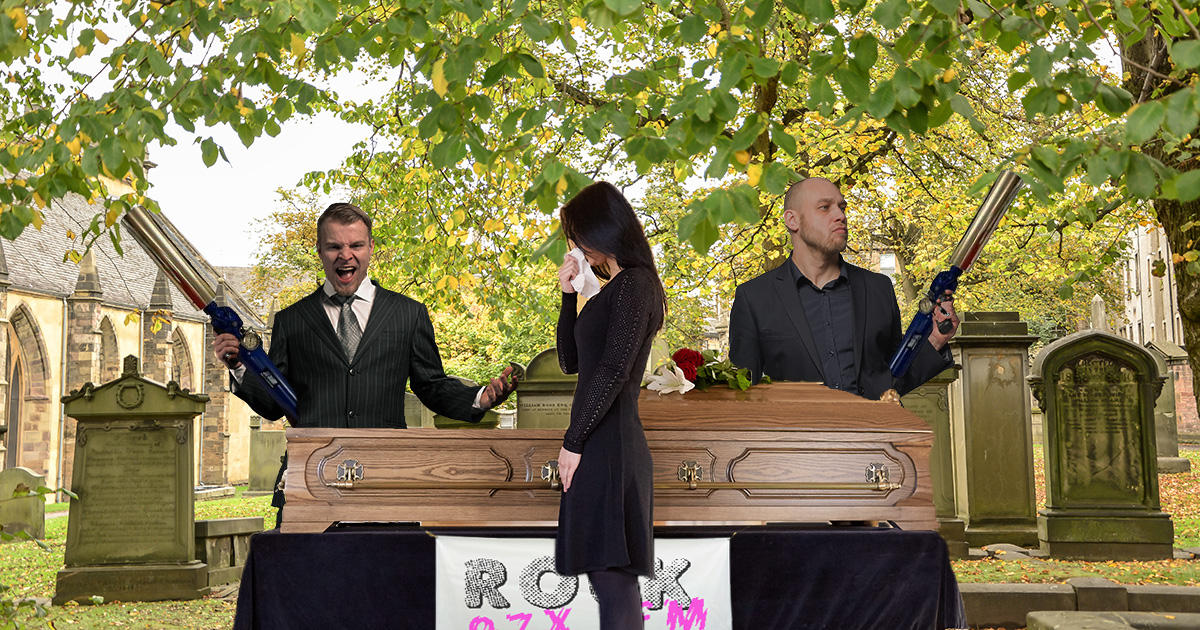 CEDAR RAPIDS, Iowa — Daryl Jenkins, also known by his radio persona “Ass-Boy Jenkins,” was honored with a 12 Panty-Gun salute over the weekend when he was laid to rest at Mt. Hope Park Cemetery, distraught sources confirmed.

“Ass-Boy was always willing to go the extra mile. He was the guy ready to fill up an extra puke bucket, or shart the hardest in the 97X fart-box sponsored by Dunkin Donuts,” host of “The Morning Hangover” Ray-Ray Black eulogized before the salute. “We lost one of the greatest sidekicks in radio history. Your service on the Boob Patrol is finally over. Rest easy, Ass-Boy — you’re watching foxy boxing with God now.”

Jenkins died last week after falling off the roof of the Lindale Mall during a Rock 97X FM “Balls on the Mall” promotion.

Funeral Director Yolanda Green explained how her staff made the 12-Panty Gun salute work to celebrate the beloved Ass-Boy.

“It took a lot of phone calls… specifically to the FAA to avoid low-flying planes during the salute,” said Green. “We also had to make sure none of the undergarments hit any of the waterfowl that live in the pond that borders our land. While we couldn’t accommodate their first choice of thong panties, a larger panty did help with wind resistance.”

97X FM Program Director Mike “Stryker” Battaglia ended the ceremony by pouring out a half-gallon tub of K-Y Jelly on top of Jenkins’ casket as it was lowered into the ground.