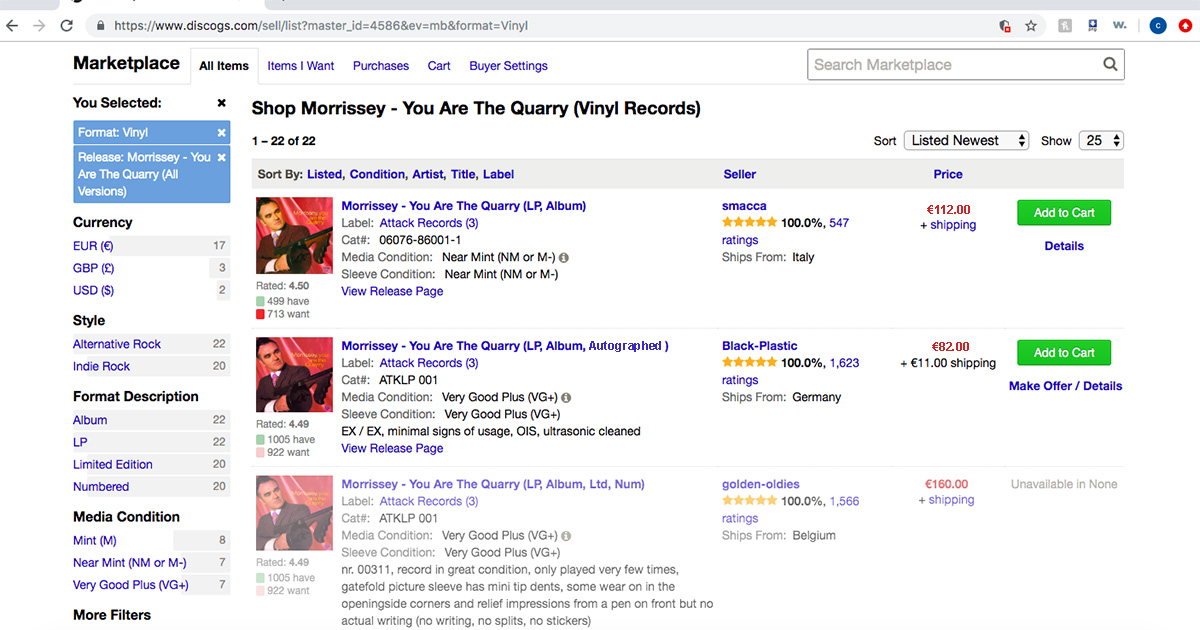 PORTLAND, Ore. — An autographed, vinyl copy of Morrissey’s album “You Are The Quarry” sold on Discogs.com for 30 euros less than an unsigned copy on the same day, stunned record collectors reported.

“Frankly, we’ve never seen anything like this. No artist has ever become so maligned as to tank the value of signed versions of their records,” explained Discogs.com creator and CEO Kevin Lewandowski. “At this point, people are so averse to being viewed as a diehard Morrissey fan that they would spend more money on a fresh copy, rather than risk looking like some hateful Morrissey stan who thinks Nigel Farage might have a few good points.”

When reached, the buyer admitted to feeling morally conflicted about spending 82 euros on the work of an artist widely considered to be “bone-headed at best” and “racist at worst.”

“I’ve been collecting The Smiths and Morrissey records since the ’90s. I have a fairly complete collection — hell, I even have that Nosebleeds 7” single for some goddamn reason,” admitted Discogs user WizardOfMoz. “But I dropped and broke my ‘You Are The Quarry’ record when moving apartments, and while that was very satisfying, I need another one just for completion’s sake. I don’t support any comments from Morrissey post-1985, but this collection isn’t gonna fill itself.”

“And yes, I regret my username, but I made my Discogs account in 2002 when I thought Moz could still right the ship,” WizardOfMoz added. “I’ve gained too much of a reputation on this account to attempt to think of a different Smiths pun now. It could totally mar my status.”

For her part, the seller expressed no regret at the price of the sale.

“I would have sold it for $10 honestly, but I figured I could get a little more for someone who wants to separate the art from the artist,” said record store owner Julia Bosworth. “Who wants to put the effort into ignoring him saying, ‘The Chinese are a subspecies’ just to listen to ‘I Have Forgiven Jesus?’ Apparently, just one person on the entire internet.”