Recently Thawed out Caveman Misses the Way Scene Used to Be 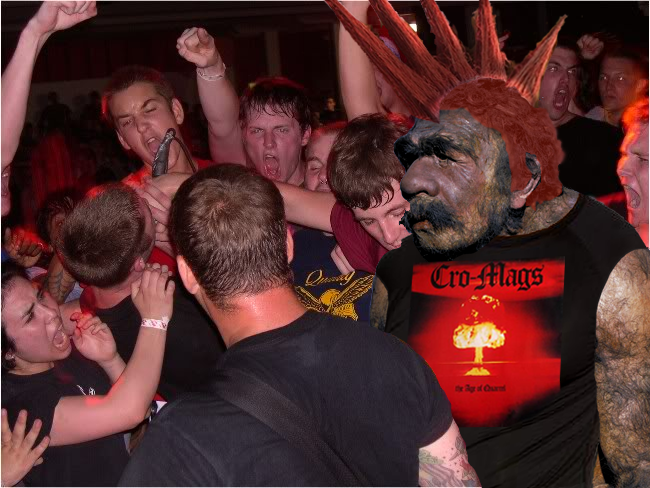 LOS ANGELES — New York native and recently unfrozen caveman, from the Homo Elitus subspecies known simply as Ugg, admitted to missing the way the scene used to be back in the stone ages, multiple uninterested sources confirmed.

“Man, it used to be about the music. None of this ‘guitar’ or ‘bass,’ just animal-hide drums played with bones,” said Ugg before ravaging the produce section of a Whole Foods. “That’s when it used to mean something. I heard Hoax played in a cave in San Francisco? Big fucking deal! Those were the only venues available to us back then,”

Since being thawed out of a glacier by scientists at UCLA, Ugg has been seen at various shows in the Los Angeles area, cowering in the back, inspecting and sniffing other hardcore kids. Ugg is the only remnant of an ancient hardcore scene forgotten to time.

“The concept of the circle hadn’t been invented yet, so when the fast parts came, we just sorta ran around aimlessly. It was a simpler time man,” Ugg said between shrieks of fear at every passing car. “Did we have a few militant Neanderthals ruin some shows? Sure. That was just part of it. But me and my Homo Habilis brothers stomped those guys out fast.”

Despite Ugg being a miracle of science, some people in the scene are simply not impressed.

“He’s always going on about how revolutionary being able to ‘stand’ at shows is and how he practically invented walking upright,” said 36-year-old Jimmy Blood. “Look, we all understand the scene used to be awesome, but everyone knows the best time for hardcore was when Ten Yard Fight was around, not in prehistoric times like Ugg is talking about. I do agree that the kids today just don’t get it, though.”

Ugg’s erratic behavior and crotchety attitude has earned him a negative reputation amongst members of the scene. Locals reported several incidences where Ugg slapped cell phones out of hands, brandished long spears, and bared his teeth in an intimidating manner.

“I mean, they were all looking at tiny people in these shiny little black boxes. They weren’t even watching the bands! Back in my day we would have clubbed them to death, but I guess that doesn’t fly anymore,” added Ugg. “The scene’s gone soft, man.”