Punk Talking Way Out of Ticket and Into Assault Charge 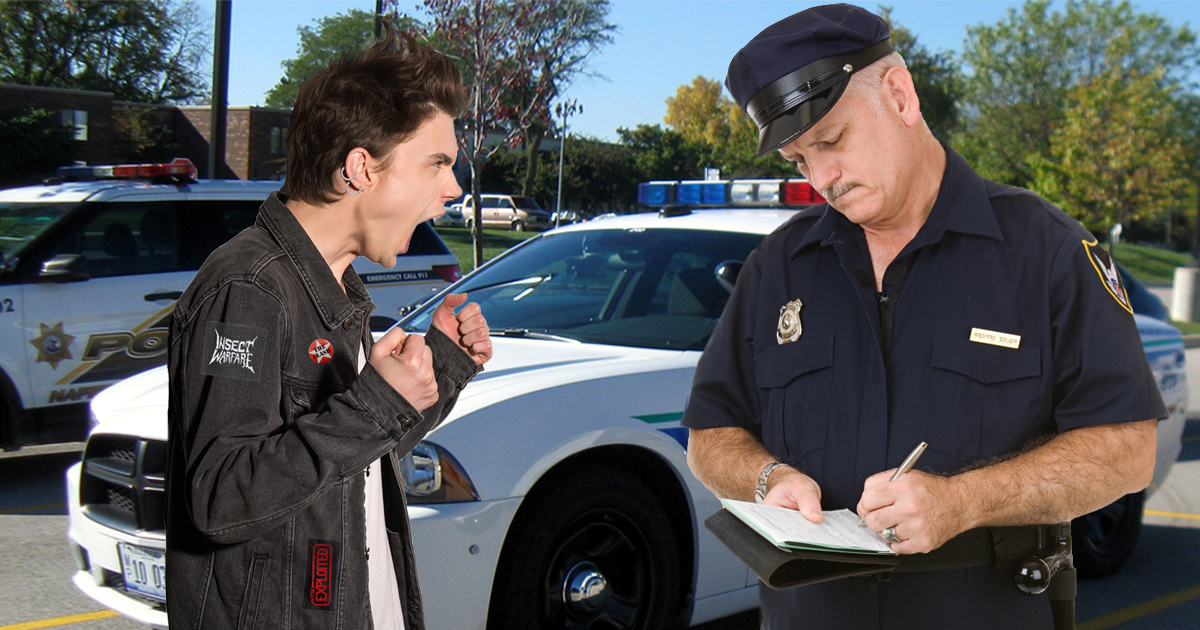 PORTLAND, Ore. — Local punk Tim Bell talked himself into an assault charge yesterday after aggressively confronting a police officer in attempting to talk his way out of a ticket for a broken tail light, public arrest records confirm.

“I knew once I saw the ol’ ham sandwich approaching my window, I’d get out of this ticket with a game of mental chess. I was fully prepared to checkmate that motherfucker,” said Bell from Multnomah county jail. “Once I verbally attacked his appearance, profession, and all around existence, he started getting all weird on me… I got out of the car to shake his hand and clear things up, and before I know it, I’m face down in the dirt.”

Authorities involved had a much different perspective on the situation, which purportedly escalated very quickly.

“I was going to let the kid off with a warning — he looked like he was in rough shape, and the state of his car would have made Marie Kondo quiver in fear. His life was obviously in shambles. But he just wouldn’t shut the fuck up,” said arresting officer John Lane. “After 10 minutes of him blatantly insulting me, he charges out of his seat with his fists out and a shit-eating smirk that could send the pope into a murderous rage. So I did what any officer would — waited to notice the slightest implication of physical contact, then tased the living hell out of him.”

The passenger in the car with Bell offered her own account.

“I mean, yeah, fuck that cop… but honestly, I’ve seen Tim’s god-awful personality screw him over more times than I can count,” said witness Kelly Duffield, who left Bell’s car on the side of the road. “When I saw him go down, it took a lot out of me to not run over and kick him in the forehead a few times myself — there was something surprisingly therapeutic about watching him jolt around on the ground like a dying fish. I don’t know. Made my Uber home pretty relaxing.”

At press time, Bell was watching reruns of MTV’s “Yo Momma” to prepare for his upcoming court hearing.