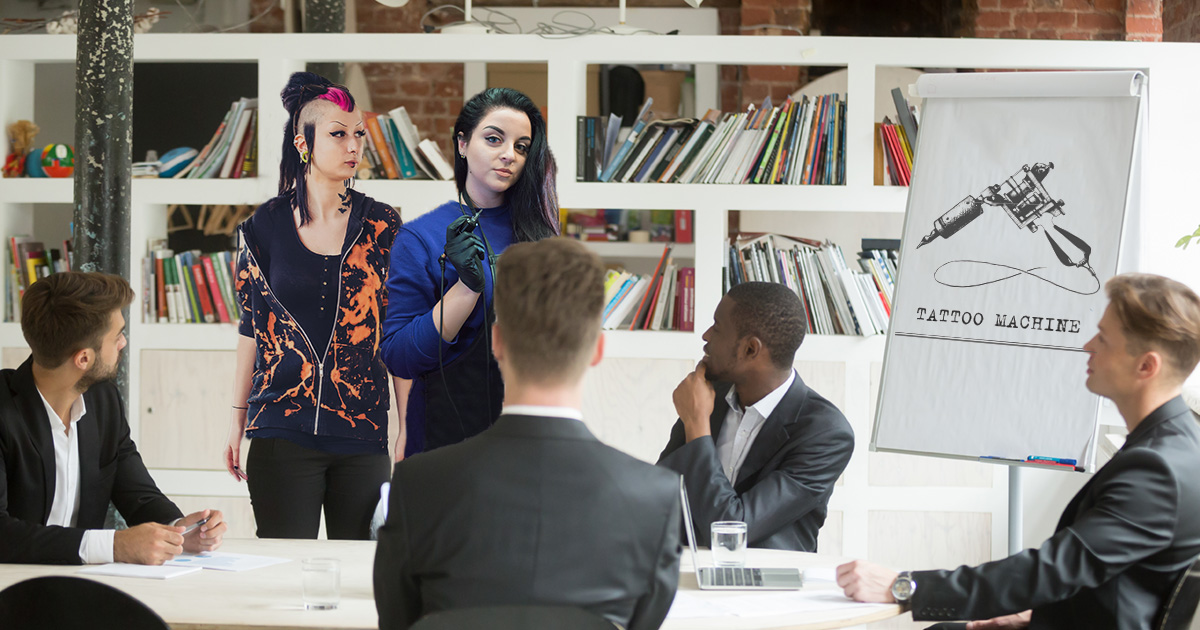 SAN JOSE, Calif. — Local punks Simone Marek and Kris Hagen announced today that they have secured “A” round funding to launch TatWell, a startup created to disrupt the stick-and-poke tattoo industry with a “game-changing” automatic tattoo machine.

“Everyone wants tattoos… but few have the patience for hand-poked designs that, honestly, end up looking like massive flea bites over time,” explained Marek. “At TatWell, we’re making the entire process smoother — for artists and patrons alike — by taking the handiwork out of hand-poking through the power of machines. Welcome to the future.”

“Honestly, it’s wild that nobody thought of this before,” added Hagen. “You don’t need an economics degree to understand that market demand for faster, cleaner tattoo work isn’t being met by stick-and-poke providers. A sewing needle and India ink can only handle so much.”

Heather Huynh, an intern who joined TatWell shortly after launch, seemed ambivalent about the company’s mission.

“I took the job because they’re paying me an absurdly large amount of money to basically tag TatWell in photos of stick-and-pokes on social media. That’s it,” said Huynh. “I figure they’ll burn through the startup capital before anyone realizes how stupid the idea is. But by then, I’ll have saved up enough cash to launch my punk cryptocurrency, CrustCoins, and I can tell them to go fuck themselves.”

“It’s flattering they think our industry is so big, they borrowed millions of dollars to disrupt it,” said Sykes. “But all they did was invent a more expensive tattoo gun. That won’t affect me at all. When people want faded, wobbly ghost outlines gently stabbed into their ankles, they won’t go to these idiots — they’ll come to the cat-hair-covered floor of my studio apartment.”

At press time, Marek and Hagen were already seeking investors for their new idea — adhering patches to clothing with the help of an electric machine.