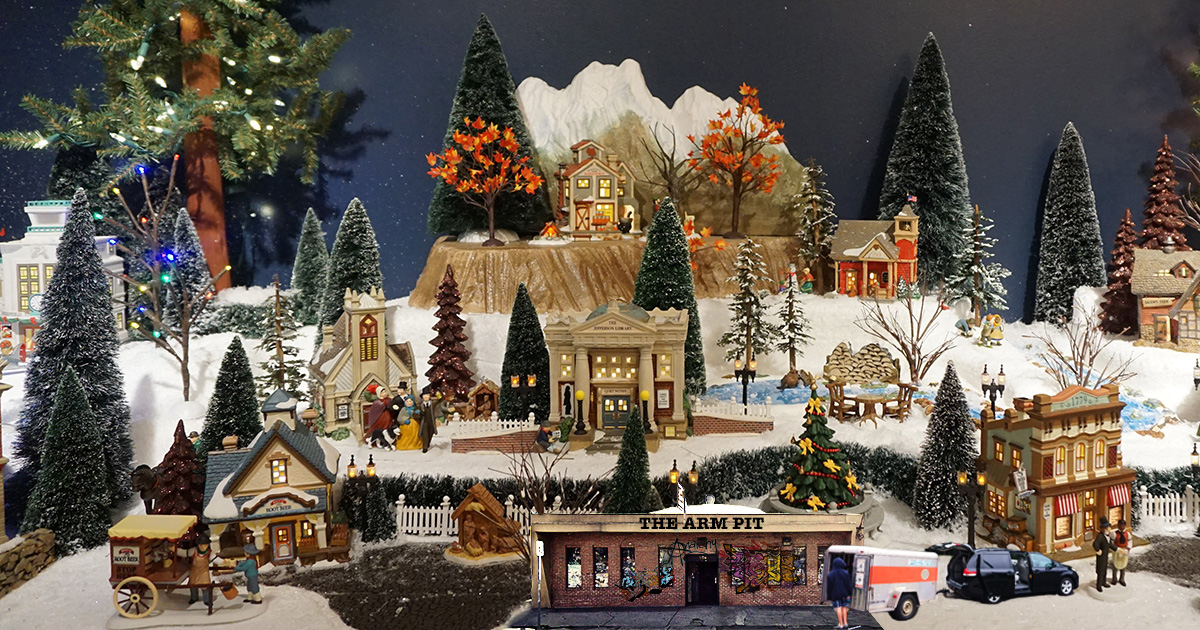 “I put it between the candy shop and the pet store — I called it The Arm Pit. Isn’t that cute?” said Costa, pointing to the intricate calligraphy lettering painted above the door. “I also added vulgar graffiti, and a tiny little punk band unloading their gear from a tiny little U-Haul in the alley.”

“My display needed more grit,” she added, “and what better way to show that off than a DIY venue, complete with faulty wiring?”

Local Christmas village display enthusiasts, known to come from as far away as Rhinelander to see Costa’s room-sized animatronic wonderland, were reportedly taken aback by the untraditional addition.

“Honestly, I thought the audio of people fighting outside — accompanying the sound of someone vomiting in a trash can — was a bit much. It just doesn’t jive with the ‘Christmas in the Alps’ vibe she curated for the rest of the town,” a disappointed Patricia Weber told reporters. “We always knew there was this rebellious side of Mary… but for it to manifest itself in this way makes me concerned for her mental well-being.”

Visitors claimed Costa seemed to have put more effort into The Arm Pit than other buildings in the town — pointing to a tiny, hand-painted figurine of Ian MacKaye checking his phone by the venue door, a policeman illegally searching a punk for drugs, and a neighbor complaining about the noise.

“If you press the button on the U-Haul and look through the window, you see a moving mosh pit and hear a version of Bad Religion’s ‘American Jesus,’” Costa said excitedly. “I was going to add a tiny, shirtless Iggy Pop peeing on the general store, but I couldn’t get the skin texture scaly enough.”

Rumors claim Costa is already at work on a DIY record label storefront in an abandoned hardware store, complete with squatters panhandling outside, to add to next year’s display.