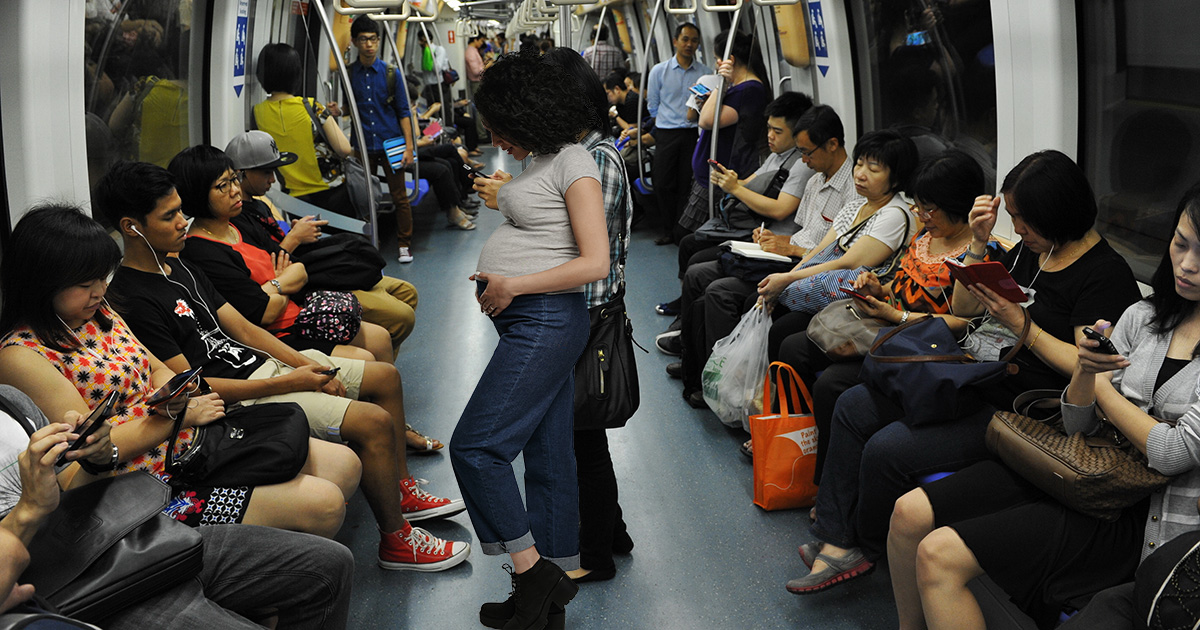 SINGAPORE — Local heroine and seven-months-pregnant woman Candace Xiao willingly and graciously offered her seat to some dude wearing Chucks during her commute on the train early this morning, inspired sources confirmed.

“I could tell he was gonna ask for it, and I didn’t feel like having an argument at 6:15 in the morning,” Xiao admitted modestly. “That’s when I noticed his Chucks: there was 0.00017 inches of rainfall this morning, so the Chucks were completely soaked — his footsteps sounded like a dog eating yogurt. I was getting off in seven stops anyway, so I gave him the seat.”

The Downtown Line train was preparing to depart Hillview Station when Adrian Tan sprinted through the closing doors at the last second, screaming “Fuck fuck fuck!” before spending several seconds rotating in a circle, his backpack colliding with a 360 degree circumference of commuters, and settling on the seat occupied by Xiao.

“I barely made it — Chucks aren’t the best running shoes, considering they’re basically canvas clogs. I almost didn’t clear that dude in the wheelchair,” Tan claimed. “That car was packed as fuck, too: I thought I might have to stand the whole commute on these flat soles. But then, I heard the voice of an angel asking if I want to sit. Some people still know the meaning of kindness. I’ll never forget her expression: she rolled her eyes with such compassion.”

Fellow passenger Dr. Eileen Santos, a consulting physician at Singapore General Hospital, was immediately able to identify that Tan was suffering from an acute case of Chuckfoot.

“Chuckfoot is a condition caused by prolonged exposure to the inside of Chuck Taylors, which causes the feet to feel sub-rad,” explained Dr. Santos. “His symptomatology was typical — slouched shoulders, indicating poor posture exacerbated by an absence of arch support, and a facial expression trying not to betray his discomfort for fear of looking lame. All textbook Chuckfoot.”

At press time, Tan could be found on the North South Line occupying four seats with his backpack, bags of groceries, and didgeridoo case.