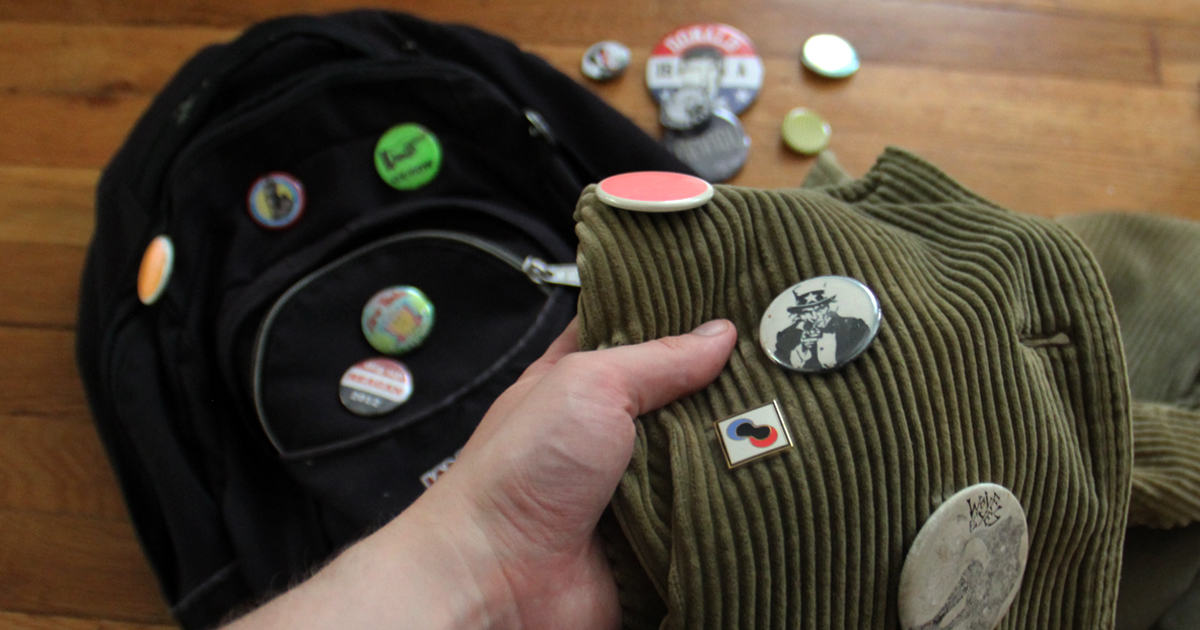 PHILADELPHIA — Several local punks noticed an increased movements of pins, buttons, and other accessories from jackets and coats to backpacks and messenger bags with the shift to warmer weather, all across the city.

“I’ve been living here since 2010, and though I’m no expert, you start to pick up on patterns after a while,” said house venue resident Wes Fulton. “The red ones usually go from the lapel to right next to the Jansport logo, the blue ones go higher up usually, and the white ones end up closer to the bottom. It really is a sight to behold.”

Experts in pin migration shared some insight into the habits and trends of this little-understood force of nature.

“Pins have had to adapt their migration patterns over the last few decades,” said cultural anthropologist Derek Waters. “They’ve more recently been spotted in places such as 5-panel hats, guitar straps, and even some varieties of belts. There’s been a lot of speculation about the impacts of climate change on their movements; as the weather stays warmer for longer, they’ll need to find more permanent roosting spots in order to ensure their continued survival.”

Citizens expressed joy in seeing the buttons return to their homes on the backs of various hipsters.

“It’s always a welcome sign of the return of spring,” said local tattoo artist Chloe Stein. “You don’t realize how much you missed it until you notice it again. The sound of birds in the trees, children playing in the street, and a huge Turnstile pin hanging off someone’s messenger bag just begging to be caught in a bush or a bike chain. It really signifies that winter is finally over.”

Local punks described the flight paths from their perspective.

“One of the challenges is balancing the pins from three denim jackets across two bags,” said Hatefist bassist Andy Cooper. “Like, everyone knows I love Rites of Spring, so do I put the four-inch button on the bag that I use to carry beer to shows, or do I save it for my nice backpack that I wear to the record store? It’s all about establishing cred without looking like a fucking dork.”

At press time, Cooper was considering cancelling his band’s show that night because of the severe number of pin holes in his left thumb.