No One on SongMeanings.Com Even Fucking Close 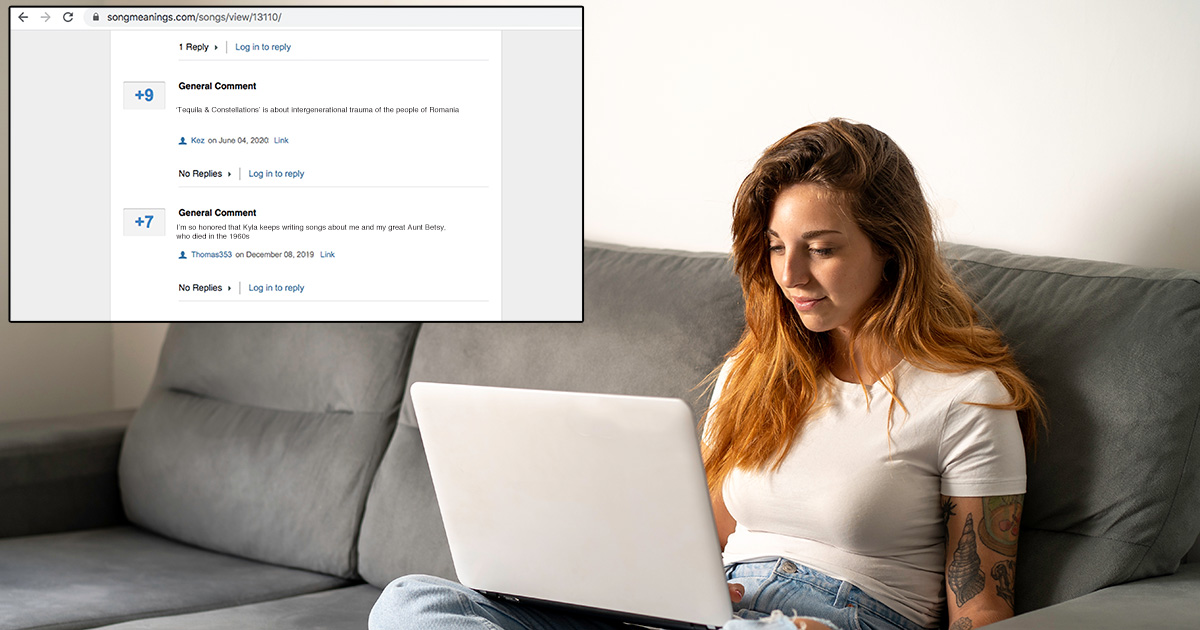 CHICAGO — Singer-songwriter Kyla Bernhardt learned today just how much her fans have failed to successfully parse the artistic intent behind her songs and many others’ on lyric site SongMeanings.com.

“I had to refresh my memory for an upcoming livestream, so I ended up at SongMeanings.com to see if I could whip up some talking points to share with fans. But holy shit, I can’t believe what these morons think I’ve been singing about,” explained Bernhardt, whose abstract lyrics have netted her a devout cult following. “I understand that music is open to interpretation, but you can still be a total dumbass about it.”

“One user confidently stated that my song ‘Tequila & Constellations’ is about intergenerational trauma of the people of Romania,” recalled a befuddled Bernhardt. “But I wrote it about being drunk in the desert with my partner. If this is how my music is analyzed, it’s time to sell out and start making music for VW commercials. At least it’s not just me — multiple people seem to think ‘Stairway to Heaven’ is about the military-industrial complex. Idiots.”

“I’m so honored that Kyla keeps writing songs about me and my great Aunt Betsy, who died in the 1960s,” says SongMeanings.com admin and superfan David Richards, who Bernhardt vehemently denies knowing. “But I also love her early era, when she sang primarily about Evangelion and the filmography of Charlie Kaufmann. SongMeanings.com gives my life meaning. Since I’m an admin, I’m lucky enough to ban anyone who disagrees with my interpretations.”

Education experts posit many theories on how fanbases can be so terribly wrong about the deeper meanings behind works.

“Well, for one, schools have almost eradicated funding for creative programs, so no one coming out of the public school system can tell a metaphor from an allegory,” explained Dr. Sarah Donahugh, professor of education at MIT. “So you have a generation of people who think Lana Del Rey’s ‘Video Games’ is about Lana wanting to bang Gex the Gecko, or that ‘Hey Jude’ is about actor Jude Law. Poor math education also plays a factor in the latter example.”

The founders of SongMeanings.com, who allegedly created the site to debate the meaning of Ben Folds Five’s “Brick,” are working on a slew of spinoff sites, including MovieInterpretations.com, TacoMeanings.net, and IkeaFurnitureExplanations.org.