Nardwuar Surprises Canadian Musician With Original Recording of His Funeral 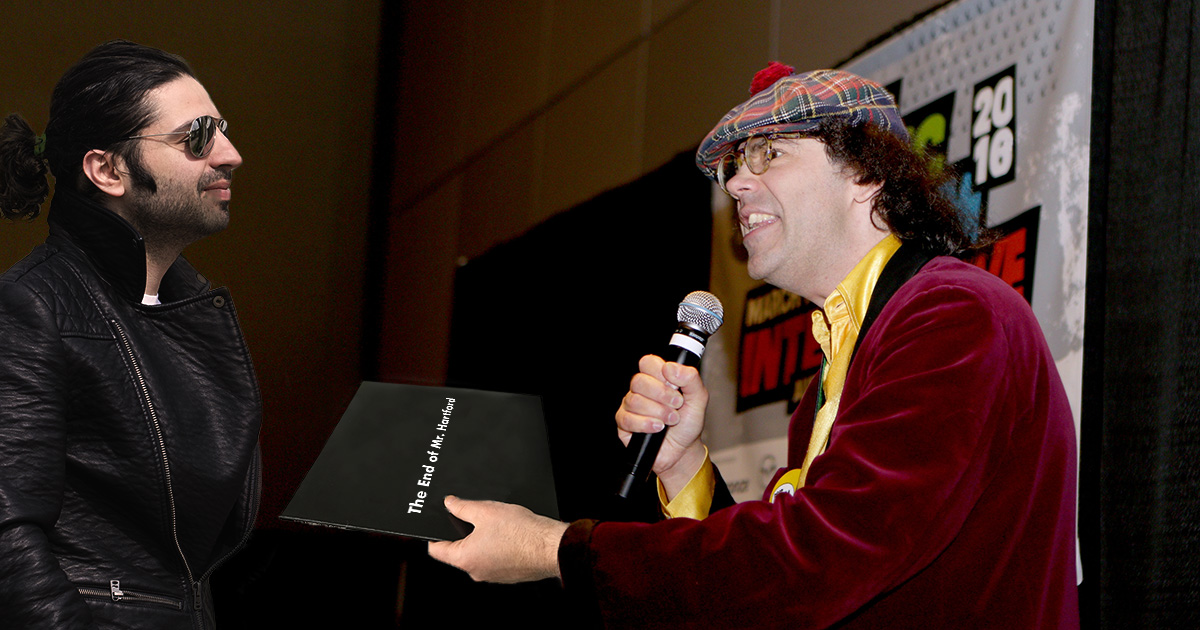 “We were all having a lot of fun, goofing around with Nardwuar… and then, everything took a sharp turn,” said Dave Olsen, Hartford’s bandmate in up-and-coming Ontario pop-rock band The Minivan. “Nardwuar handed him this package with a hollow grin on his face — all the audio is apparently from Randall’s funeral. Is Randall already dead? Am I dead? Are we in hell? Is Nardwuar the devil himself?”

The recording, simply titled The End of Mr. Hartford, featured two and half hours of unedited footage of Hartford’s funeral spread across four LPs on limited-edition, red splatter vinyl; an autograph from a priest; and several collectibles.

“Look here — inside the jacket. Those are… roses? That’s right. Roses. They’re the roses Mrs. Hartford placed on her son’s grave on that gray, October morning,” said Nardwuar of the gift. “And, if you look on the front cover here, you can tell it’s an original pressing, as — look closely — you’ll see the stains of tears from Randall’s 7-year-old niece.”

“Look on the back, at the tracklist! You’ll see this edition features the live version of your brother’s eulogy, where he recounts the story of you and him skipping rocks on your grandfather’s pond,” Nardwuar continued, as Hartford curled into the fetal position. “And, you can redeem this code for a digital download, which is pretty cool.”

Nardwuar then allegedly kneeled down to tell Hartford, “I’m sure you’ll love this: it comes with a full poster of your death certificate!”

While Hartford reportedly ran away sobbing, witnesses say he did give a sorrowful, “Doo doo,” to Nardwuar at the conclusion of the interview. “It’s a traumatizing listen, but it did sound crisp,” Hartford later admitted when reached for comment.

The only other three copies of the otherworldly album in existence are available on Discogs at a starting price of $299.99.