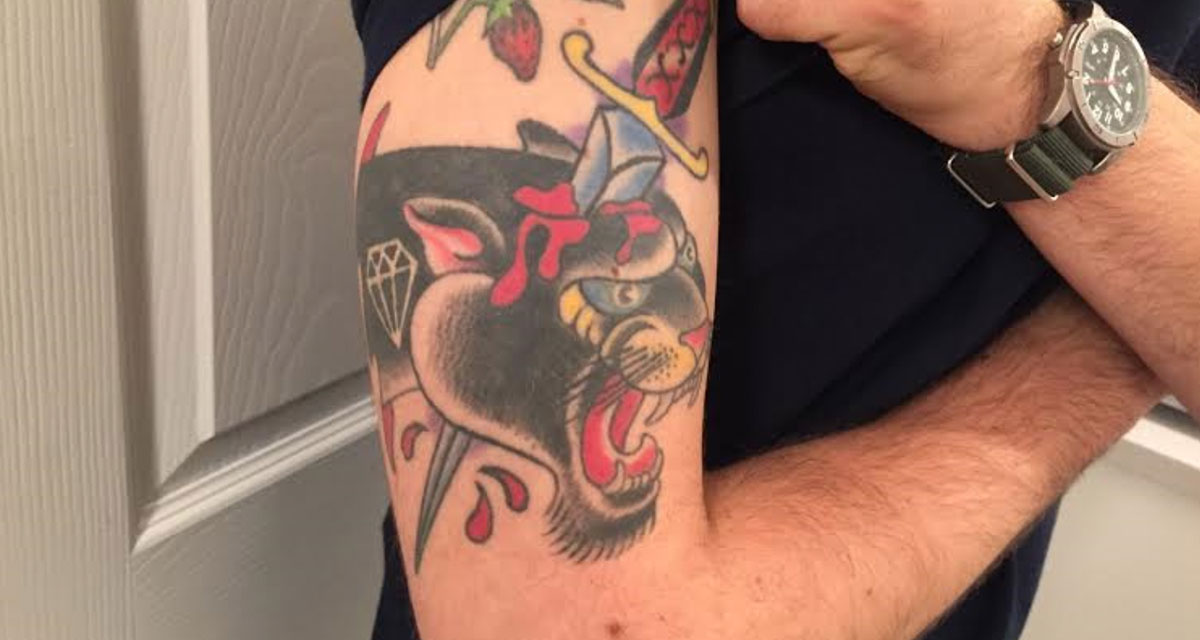 WILKES-BARRE, Penn. — Local tattoo enthusiast Josh Stuart is covered in tattoos which act as constant reminders of his adventures, and the many rare and endangered animals he has mercilessly stabbed through the face, according to multiple sources who have inquired what his tattoos mean.

“This one here, the panther? Yeah, stabbed it with a jewel-encrusted dagger I lifted from an ancient tomb,” said Stuart, rotating his bicep to show the large tattoo. “I didn’t want to do it, but there was no way I was letting some panther ambush our ragtag group of treasure hunters deep in the Amazon jungle.”

Stuart’s body is a veritable smorgasbord of weaponry piercing various open-mouthed faces of animals. On his right calf, a scimitar decapitating an Asian elephant is adjacent to a cobra impaled on a switchblade.

“It’s really crazy how many of my various excursions and trips abroad have turned into violent exhibitions of man’s dominance over beasts,” Stuart reflected. “I’ve stabbed a hell of a lot of flora and fauna.”

Many have mistakenly thought Stuart’s numerous tattoos were picked from a book of flash or obtained at tattoo conventions, but every single piece of art on Stuart’s body has unique significance.

“When the Kraken rose from the depths and ripped our mast off the deck with a slimy tentacle, I knew we were in trouble,” said Stuart of the massive shipwreck tattoo on his chest and stomach. “I was stranded on that piece of driftwood for over 48 hours until I washed ashore in Japan.”

“Which is lucky for me, because that’s where I met my wife,” said Stuart, turning his shoulder to reveal a traditional geisha.

In one of many bird-related incidents while on peyote in Joshua Tree National Park, Stuart witnessed an American bald eagle battling a diamondback rattlesnake. The same eagle allegedly stole a quiver of flaming arrows Stuart was shooting aimlessly into the Southern California desert, as depicted on his left thigh. Stuart, however, was incredulous when asked if he had served any prison time.

“Oh these? No, I’m just a huge No Doubt fan,” he said pointing to the spiderweb on his left elbow.