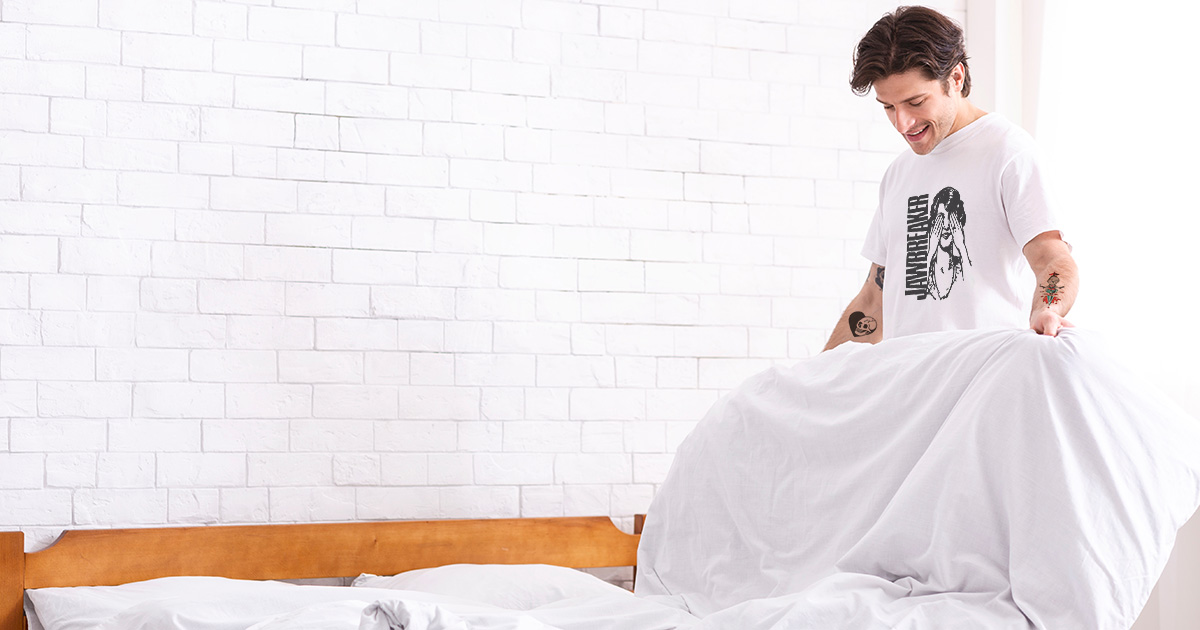 “When I was younger, I just assumed I’d be punk my entire life,” admitted Donello, who has been upgrading his apartment’s furniture from discarded, potentially bug-infested sidewalk finds to more high-end pieces. “But recently, I started to see why someone might prefer a tasteful mid-century modern sofa over wrapping a Gibson Les Paul’s flight case in bubble wrap and lounging on that. But don’t get it twisted — I’ll still fuck you up and I’ll always resist power. This duvet cover will just help me sleep better and fight harder.”

West Elm cashier Karina Popp claimed that in her six years of working for the popular yuppie furniture store she has never had so surprising an encounter.

“When that dude approached the counter, I started to reach for my silent security alarm,” recounted Popp. “It was clear he recently abandoned his mohawk because his hair was all different lengths and shades of faded colors. He looked like he should have smelled like ass, and yet I detected a whiff of Chanel Platinum Egoiste coming from his direction.”

“I thought maybe he was going to be one of those punks who dump red paint on a faux fur display rug,” continued Popp. “But he just whispered that he wanted to buy the duvet cover with a look of clear shame. He couldn’t even make eye contact with me. I understand, this is a big step towards not living like a total piece of shit.”

Donello’s girlfriend Ashley Vincent is thrilled that he is edging closer towards a more mainstream existence.

“Do you know how embarrassing it was to tell my family that his band’s name is Buttsack?” asked Vincent. “Very. But I don’t have to worry about that any longer. Once his bandmates saw West Elm boxes in his trash, they kicked him out instantly without so much as a conversation.”

As of press time, Donello was most recently spotted entering a local Fidelity Investments branch to set up a Roth IRA while wearing Groucho Marx glasses.