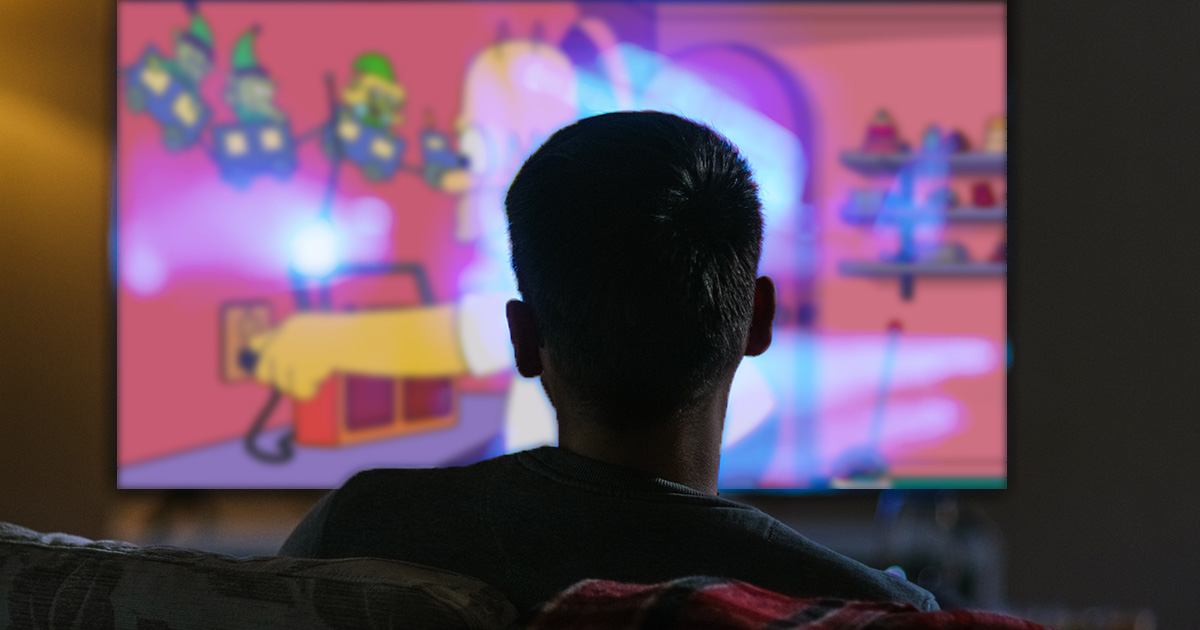 HOUSTON — Local man Joseph Graciano spent the past 72 hours obsessively streaming “The Simpsons” on Disney+ looking for anything else that could portend doom for the human race, roommates who would love to watch something else confirmed.

“First it was Trump being president, then Disney buying Fox, and now the coronavirus. ‘The Simpsons’ predicted it all,” Graciano said, roughly rubbing his eyes with his palms. “Sure, in the episode ‘Marge in Chains’ it was Japanese and called ‘Osaka Flu,’ and that was more about America’s fear of being outpaced economically by Japan 30 years ago… but other than all that, it’s exactly the same as COVID-19. We’re through the looking glass here, people,” Graciano added before pausing the TV to read and scribble down the name on each puppies’ bowl in the episode “Two Dozen and One Greyhounds.”

Graciano’s obsession has particularly taken its toll on roommate Mike Benavides, who’s stuck in the apartment with him during the “shelter at home” order.

“The whole thing about ‘The Simpsons’ being some sort of jaundiced Nostradamus is fun to talk about when we’re getting high, but fuck me,” Benavides said, twanging one of the pinned pieces of yarn on Graciano’s connection map linking Trump’s border wall and “The Simpsons” Bumblebee Man character. “But Joe’s really gone stir crazy: Bart holding up a bus ad that looks like it says ‘9/11’ years before isn’t some goddamn Illuminati shit. It’s just some cromulent, Reddit nerd shit.”

Reached by FaceTime, “The Simpsons” showrunner Al Jean dismissed the fortune teller theory that’s made the rounds on social media throughout the years.

“Yeah, I’ve heard that we predicted coronavirus, among other things,” laughed Jean. “Had we really had the power to accurately predict something like Sigfried and Roy being attacked by one of their tigers, we’d play the lottery rather than drop cryptic hints decades ahead of time about, say, that solar-powered monorail crash that’ll kill all those school children in 2021.”

At press time, Graciano was warning all of his friends to avoid Knoxville this summer, lest their car be crushed by the Wigsphere.