Man Figures He Should Get Twisted, Demonic Face Growing Out of His Back Looked At 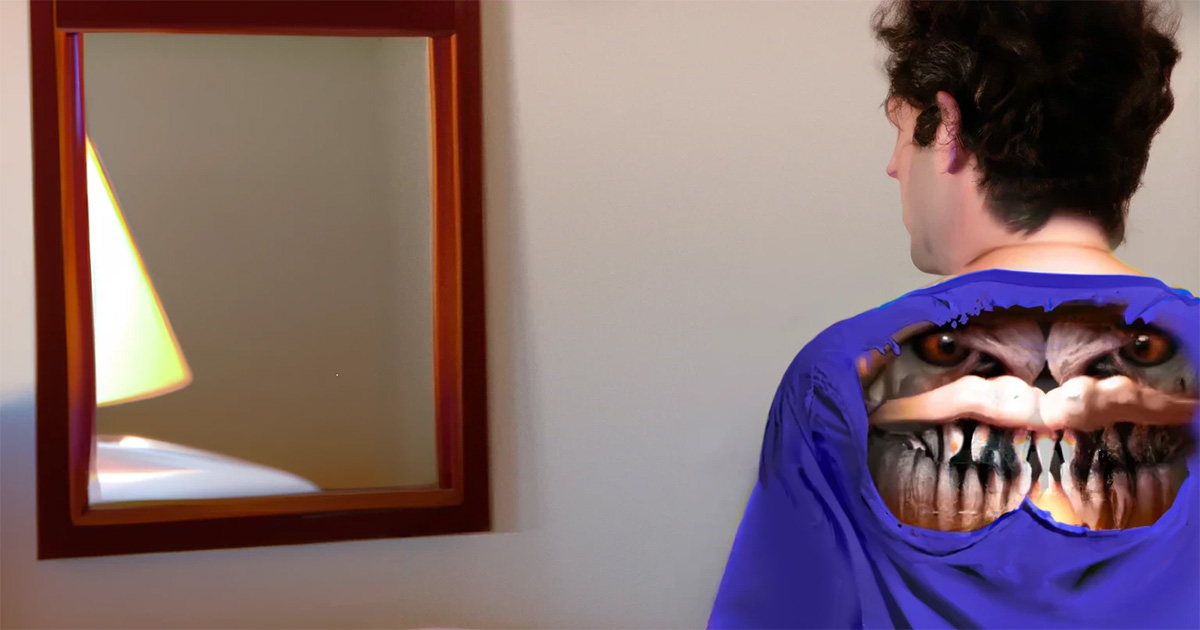 PARAMUS, N.J. — Local man Mike Jarbowski finally decided to seek medical treatment for the twisted, demonic face growing out his back after weeks dealing with the wretched figure, his family has reported.

“Being a plumber I’m in and out of old houses all the time, so I just chalked it up to an asbestos rash at first. I get busted up all the time on the job but that doesn’t mean I’m running to the doctor, I just put antiseptic cream on it and move on. But it was when my wife noticed there were teeth growing out of my back and it was speaking Latin that I figured I should pop into urgent care,” said Jarbowski. “Now this damn thing is cursing my family to burn in Hell all day, plus it’s the size of a watermelon and now none of my shirts fit. I’m hoping they can laser this little fucker off in outpatient surgery, I’m giving up overtime to get this thing looked at.”

While Jarbowski’s wife had been urging him to seek medical help for weeks, she now fears it may be too late to do anything.

“I’ve told him over and over not to take any non-union jobs fixing up creepy old houses. But does he listen? Of course not, and now he’s fated to be consumed by the unholy forces of the underworld. This is just like the time he came back with lice from that shut-in’s house, but at least those little fuckers weren’t trying to bite my tits off every 10 minutes,” said Stephanie Jarbowski. “At least this will make our Professor Quirell and McGonagall joint Halloween costumes much more realistic, if only that gaping maw can stop calling me a ‘stupid cunt’ constantly.”

Medical experts weighed in on the demonic prognosis, noting that trans-dimensional ailments can be serious if not treated.

“Most people don’t realize this, but not every search on the site snowballs into you potentially having cancer. There’s a small subsection near the bottom reserved for curses, hexes, and possessions. You’d be shocked how many staph infections turn into sentient demon claws,” said WebMD rep Charles Thompson. “The entity plaguing Mike is completely treatable, but needs immediate attention or at the very least switch up rubbing alcohol with holy water.”

After finally seeking treatment, Jarbowski was informed by his doctor that he would have to pay 100% out of pocket to remove the demon, as it was from a circle of Hell not covered by his HMO.