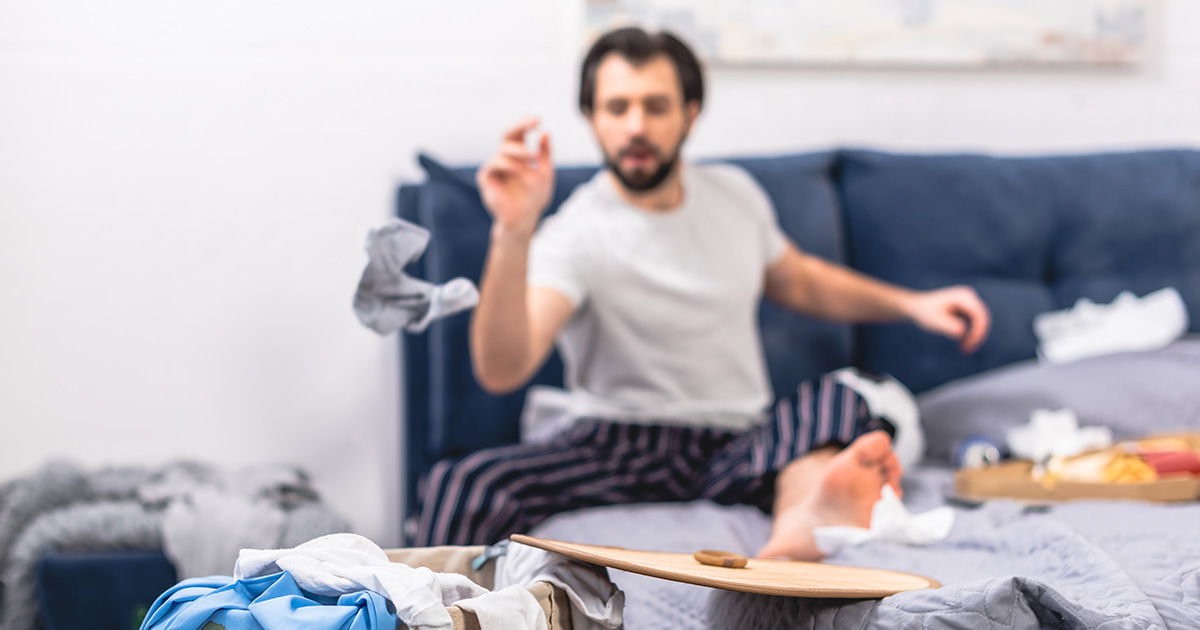 NEW PALTZ, N.Y. — Local man Stephen Banquist scattered clothing, pet hair, and random bits of garbage all over his apartment to give himself an excuse to get fully caught up on his favorite podcasts, several sources confirmed.

“I can’t just sit down and listen to a podcast, that’s fucking psychotic. Anyone that does that should be locked up. I need to stay busy and doing chores is the best time to listen to podcasts, but I’m really far behind because of the holidays so I keep cleaning and making a mess again,” said Banquist while dumping the contents of his garbage can all over his clean dishes. “I already cleaned the gutters, organized my basement, and hand washed the floors and I still had episodes of ‘Stop, Murder Time’ and ‘Misfitville’ to get caught up on, so I did what any loyal listener would do and threw some coffee grounds and old fruit around in the kitchen so I can get scrubbing.”

Banquist’s roommates have been very happy with his over the top cleaning habits.

“I’ve lived with Stephen for about eight months now, and he’s definitely the best roommate I’ve ever had,” said Banquist’s roommate, Dave Grez. “It’s like living with my own personal housekeeper. I recommended he listen to ‘In Pod We Trust’ and I haven’t had to dust the shelves or sweep the floor for weeks! Me and our other roommate Ben just got some recording equipment so we can take out the middleman. Our banter as roommates is hilarious, so all we have to do is press record to have a hit comedy podcast!”

Experts say Banquist is but one of thousands of listeners who use unconventional tactics in order to get up to date.

“We’ve seen a lot of data supporting that podcast listeners are making more time for mundane tasks in order to get caught up on their favorite shows,” said Spotify executive Josh Pludd. “We’ve seen commuters purposely taking the long way to work, as well as consumers who decide to go to grocery stores during peak checkout times. We’ve even heard at least one report of a ‘Historyomatic’ fan who resorted to marathon training despite never having run a single mile in his life.”

At press time, Banquist was reportedly seen smiling and squeezing expired ketchup onto his clean laundry after a surprise bonus episode was released.