Man Acts Like He Is First Person to Hang from Rafters 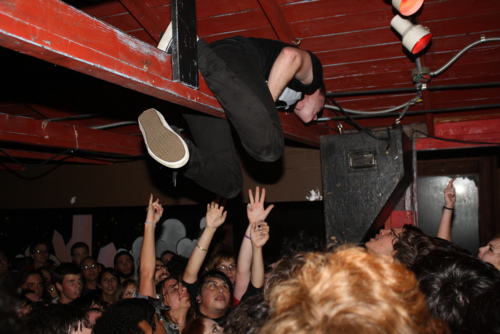 LA JOLLA, Calif. — At a recent benefit show to save the Che Cafe, local man Mike Callahan hung from the rafters during a CrystalxVision set and has not stopped talking about it since.

“I mean, the music was just pumping me up so I just jumped up and hung on, my girlfriend snapped a photo and it got 43 likes on Instagram,” Callahan remarked about this every day occurrence.

The Che Cafe has been a staple of the Southern California punk scene since 1980. Its rafters sit eight feet in the air and can easily be reached by anybody taller than 5-foot-2 with even a mediocre vertical leap.

Callahan went on to say, “I was just unstoppable up there, I could see everyone getting really hyped that I was taking this show to the next level.”

“That happens like 50 times a night whether it’s a punk show, a reggae show, or even just a slam poetry night.” Moran added, “I saw the fire marshal hang from the rafters one time.”