Local Man Adds ‘Happy International Women’s Day’ To His 2 AM ‘U Up?’ Text 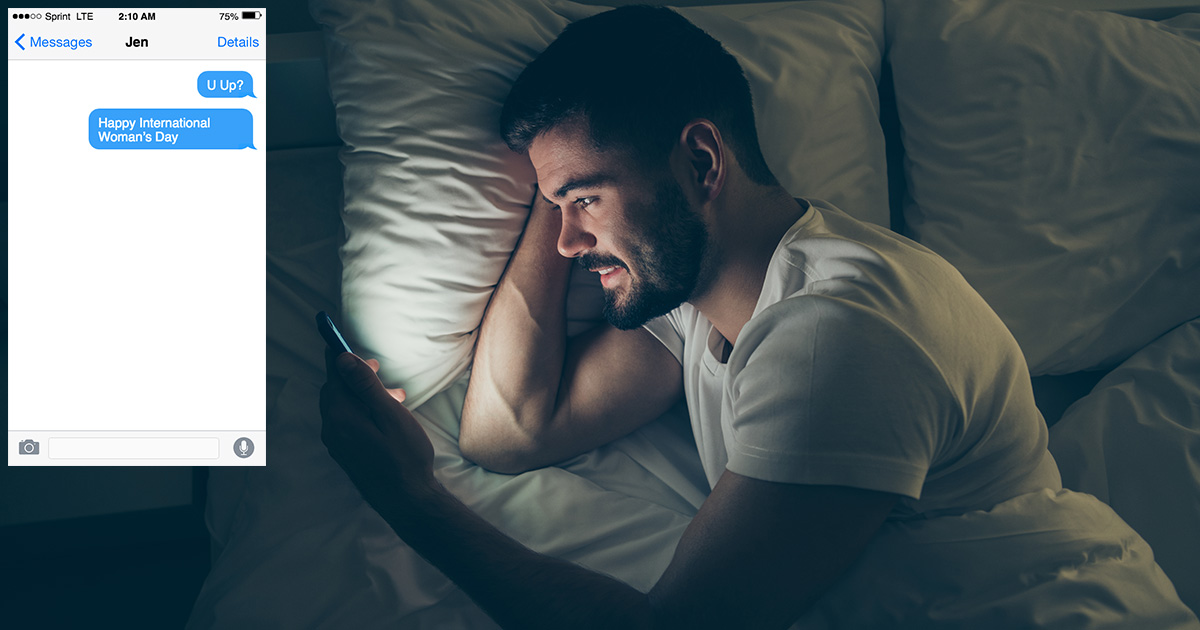 “This day only comes around every so often, so I have to let bitches of all shapes and sizes and ages know I respect and care about them,” Wade commented whilst searching ‘best Jordan Peterson burns’ on his parents’ YouTube Premium account. “I mean, it’s a day to celebrate them and the fact that they can read and even vote now so yeah, the way I see it, it’s never too early in the morning to wish them the best and see what they have planned for the big day or even during a time when most people are sleeping.”

Susan Shumate, whom Wade went on two dates with three years ago, is just one of the many, many women the supportive ally reached out to in his hour of need.

“I mean, I woke up to this text from the middle of the night. I guess he was the first one to wish me happy International Women’s Day, but it was literally two hours into the day, and he spelled it ‘woman day,’ so I don’t know,” Shumate said. “I’m confused, like did he have this day set on the calendar? Does he do this every year, and has this ever worked for him? The mermaid emoji can’t possibly appeal to anyone, right? I just responded ‘thanks xx’ and blocked him.”

“He does this every holiday, thinking it’s gonna get him laid. He texts girls on Boxing Day, All Saints Day, the first night of Diwali, the anniversary of the United Nations Declaration of Human Rights, the third night of Diwali, and on Ash Wednesday,” Brian Davis said. “It doesn’t even make sense. I mean he’s actually under house arrest for skipping his court appearance after his second DUI so he’s just been compulsively swiping for weeks. Which isn’t a huge stretch for him, actually.”

At press time, Wade had seven iMessage threads open with estranged Hinge matches, letting them know “It’s your day. I want to take you to a niche Italian restaurant with food as edible as your ass — Happy int womamm day!”