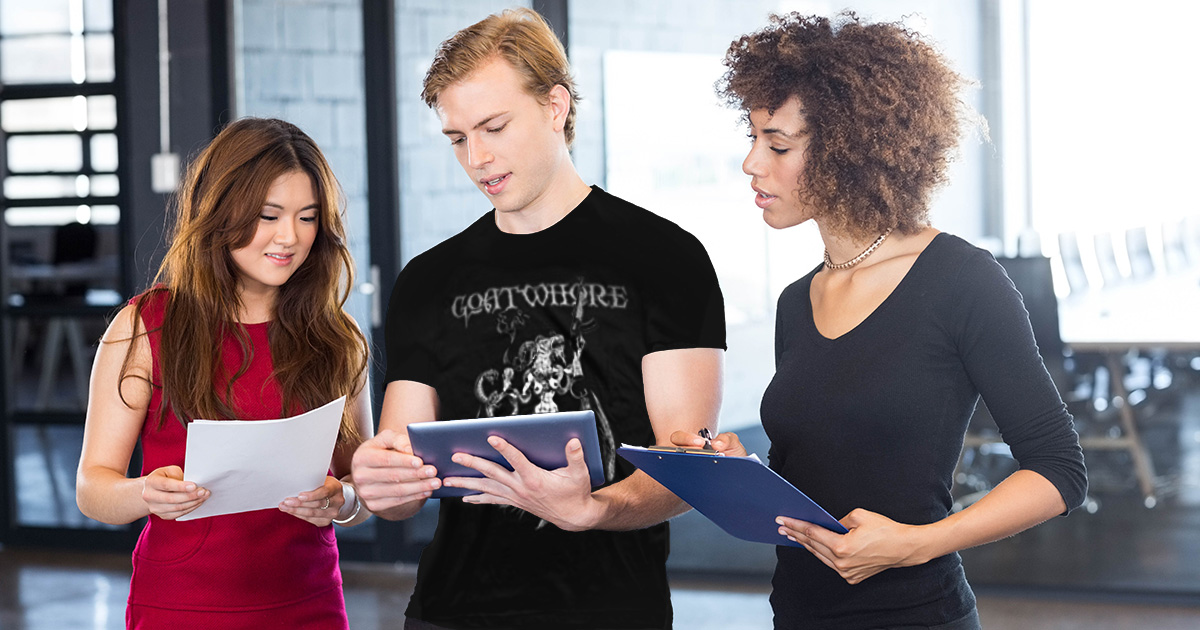 “I wear Costco button-down shirts and the same clip-on tie every day, so this is a nice change of pace,” said Durham, wearing the shirt depicting the naked body of a woman with the head of some sort of ram-like animal. “It’s a good way to show everyone the kind of person I am outside of work. I know it’s kind of edgy, but I think it’ll be worth it to dress like my real self for once.”

Office management was caught off-guard by the offensive print.

“Originally, we thought this policy would be a fun way to boost company morale, but I had no idea I was opening the floodgates to this kind of shit,” said Durham’s boss, Violet Hoffman. “I really don’t know what the hell to do. Should I check to see if he’s planning on wearing an SS officer’s hat for ‘Goofy Hat Day’ next week?”

“Goatwhore? Are you fucking kidding me? If Violet doesn’t do something, I’m calling corporate,” said H.R. representative Paul Greenblatt. “I just wanted to wear jeans and Skechers, and now I gotta deal with complaints from other workers about his stupid shirt? Fuck you, Sean.”

As the day progressed and reactions to his shirt grew more negative, Durham began to question his clothing choice.

“I’m not sure if people are loving this as much as I am. I’m getting a lot of weird looks,” said Durham, fully unaware of the severity of his understatement. “Maybe I should have gone with a less offensive shirt, like Toxic Holocaust, or Dying Fetus.”

At press time, Durham was seen packing the contents of his cubicle into a box and unsuccessfully trying to remove the Assück sticker from his desk.