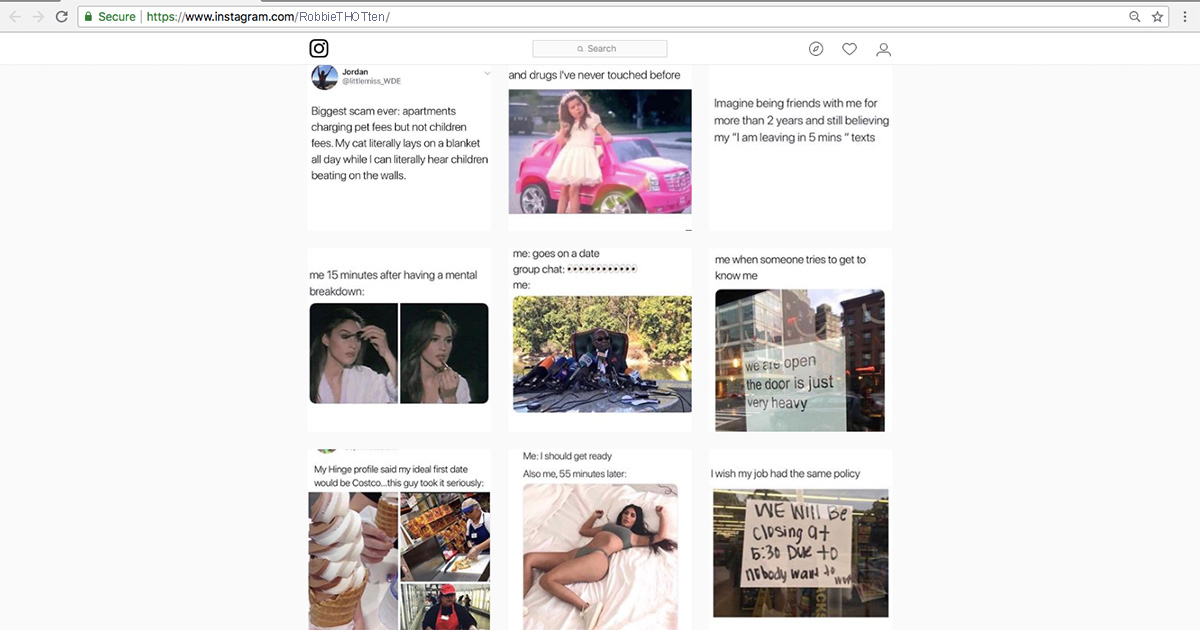 DENVER — The Instagram profile of user Viola Todd is starting to show the telltale signs of a slow, sinister transformation into a meme account, horrified friends and relatives report.

“She’s always been a fan of memes. It was just funny cat pictures at first, you know? Harmless stuff. But then she changed her Instagram handle to ‘RobbieTHOTten,’ and things started to go downhill,” said Malcolm Hardesty, Todd’s live-in boyfriend. “A few weeks ago, she took down all the pictures of us together, and replaced them with these horrible, super-compressed images of Spongebob quoting Karl Marx.”

“I always thought we would grow old together. But my conscience — my soul — would never allow me to have children with that… thing she’s become,” he concluded.

Todd, for her part, does not see her ghastly metamorphosis into a wretched memelord as a bad thing, citing a new-found productive and creative work ethic.

“Lately, I’ve been making my own memes. It’s a lot of fun,” the horrid creature bent on destroying humor said in a recent image caption. “I used to make art with pens and paints and stuff, but working with crude image macros in GIMP is so much simpler.”

“If I call in sick to work, I can churn out 40 or 50 Baby Cardi B pictures a day!” the ever-growing black hole of taste and dialogue added.

However, Todd’s appalling transfiguration has been applauded by some observers — many of whom succumbed to similar grotesque vicissitudes during their own explorations of social media’s mutant underbelly.

“RobbieTHOTten is a welcome addition to our flock,” said an Instagram user going by the alias WaluigiSenpai. “And her Becoming is nearly complete. Once she discovers the true power of the Warp tool, there’s no telling what deep-fried terrors she will unleash.”

While mutations such as Todd’s have reportedly been reversed through emergency infusions of healthy social interaction, Hardesty doubts he will ever again have a normal, non-ironic conversation with the shambling horror that was once his beloved.

“Whenever I look into the cold, lifeless eyes of that anime profile picture, I know it’s too late,” he said tearfully. “The woman I fell in love with is gone. And if someone has to take her out before the dankness spreads, it’s only right that it should be me.”