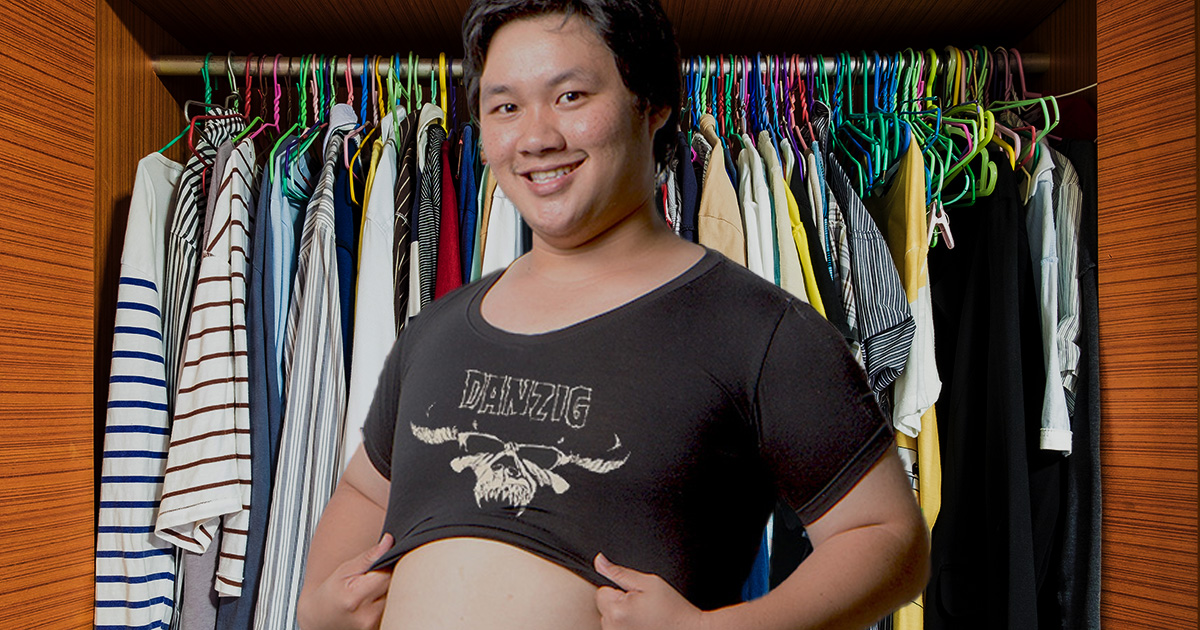 “I know it hasn’t fit me since ‘Danzig IV,’ and hasn’t fit me well since ‘Danzig II,’ but it holds a special place in my heart,” said Russo, who never fit into the shirt in the first place. “This was the exact shirt I was wearing when I saw a guy who looked exactly like Jerry Only walking into a Marshall’s. I’ll never forget that day, and this shirt was there for me, I can’t let it get turned into a rag. Yeah, it fits over my belly like a crop top and the sleeves cut off the circulation to my arms doesn’t, but most of the graphic is still there, and the holes in the armpits probably won’t get any bigger. Plus I bought that weight bench and protein powder last year too, so you never know.”

This isn’t the first time the medium-sized shirt has escaped being thrown out during routine cleanings.

“That fucking shirt has haunted me for years,” said Russo’s wife Clara, clearing a mound of old band shirts from a dusty weight bench. “It was the first thing I put into the donation bag, but I heard some grunting and fabric tearing and I knew he was trying to squeeze into that shirt again. Now he’s wearing it around with his stomach out like a fat toddler. He likes those big breezy shirts now, but he’s too cool to admit it. I guess being comfortable ‘isn’t metal.’ But marriage is about compromise, as long as he gets rid of that see-through fishnet shirt I shouldn’t complain too much.”

“It’s natural to gain weight as we age, and a lot of these punk and metal shirts were just so tight to begin with. There’s not a lot of margin for error there,” said Bjornsson as he set a garbage can full of old HIM shirts on fire. “Obviously the pandemic accelerated that for a lot of people, but even so. You wouldn’t believe how many small and medium vintage band shirts we’re getting these days. Hell, I had to hire extra workers just to sort through the mediums alone.”

Russo was last seen rushing to a Wendy’s bathroom to wash his favorite Danzig shirt after spilling an entire cup of french onion soup directly on his chest.