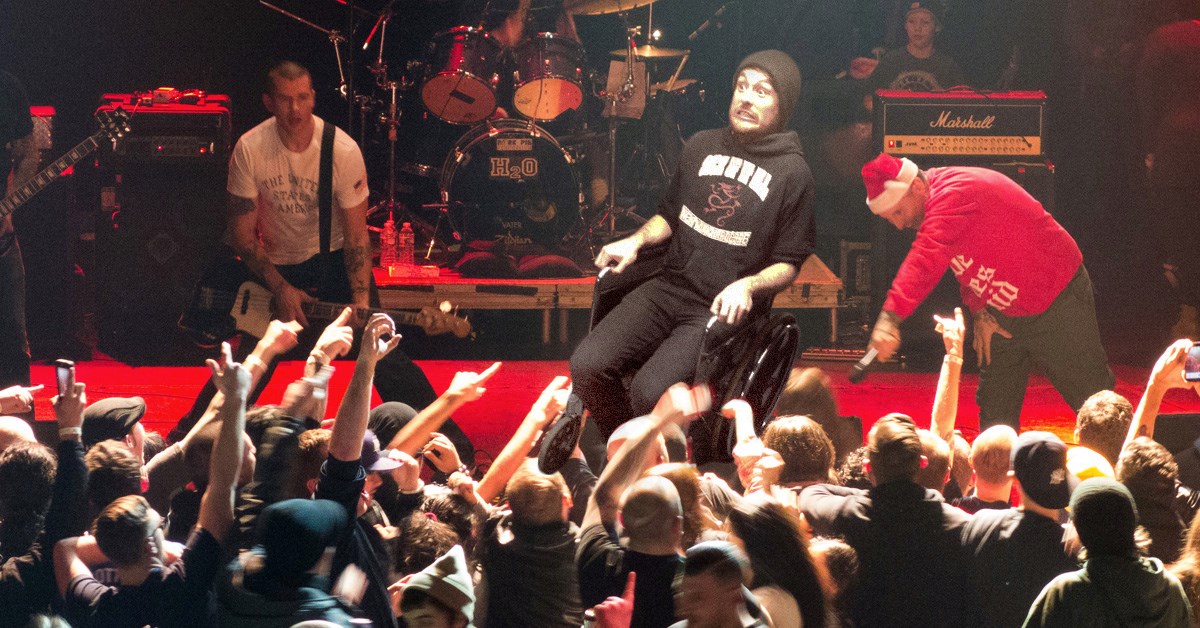 OAKLAND, Calif. —  One lucky, horrified fan of the hardcore band STEEM was forced against his will to crowd surf last night as audience members hoisted him high above their heads, nearly dropping him back-first several times onto the cold, hard, unforgiving concrete floor, multiple sources report.

Daniel Jameson, one of the audience members who lifted Andrew Smith, the wheelchair-bound fan, explained why he participated in the utterly terrifying, clearly unstable act of acceptance and solidarity.

“When I was at the ticket counter, I saw the dude in the (wheel) chair and thought to myself, ‘Jackpot. We are going to make this guy’s dreams come true tonight,'” said Mr. Jameson ecstatically. “I said to myself, ‘I don’t care if he is crippled or whatever, we’re all in this shit together,’ and man, we all just lifted him way up there.”

STEEM’s mysterious, edgy frontman, known only as “Blitz,” stopped mid-song when he saw Mr. Smith above the audience.

“Hey! Bring that guy up here right now!” said Blitz before signaling to STEEM’s roadie to get a good picture for the band’s Instagram. “This next song is for you, big guy.”

“Ahhh!” Mr. Smith screamed in horror, as crazed fans lovingly tossed him towards the stage while struggling to stabilize his wheelchair and prevent him from falling to the bottom of the pit. “No no no! Please!”

After STEEM serenaded Mr. Smith with three consecutive songs titled “Fight Back,” he wheeled himself off-stage via a loading ramp, where he spoke to a crowd of reporters gathered on the steps outside the venue.

“Earlier in the night when I had to get up this very staircase into the venue, no one wanted to help,” Mr. Smith said. “But once this generic band plays, all of sudden I’m ‘part of the crew’ and forced to engage in ways I never fucking signed up for. That is so fucked up. And you know what? This was really eye-opening for me. I would be super pissed about it if I was actually handicapped, but I just twisted my knee real bad playing basketball with the boys last week and borrowed my Nana’s wheelchair for shits and giggles.”