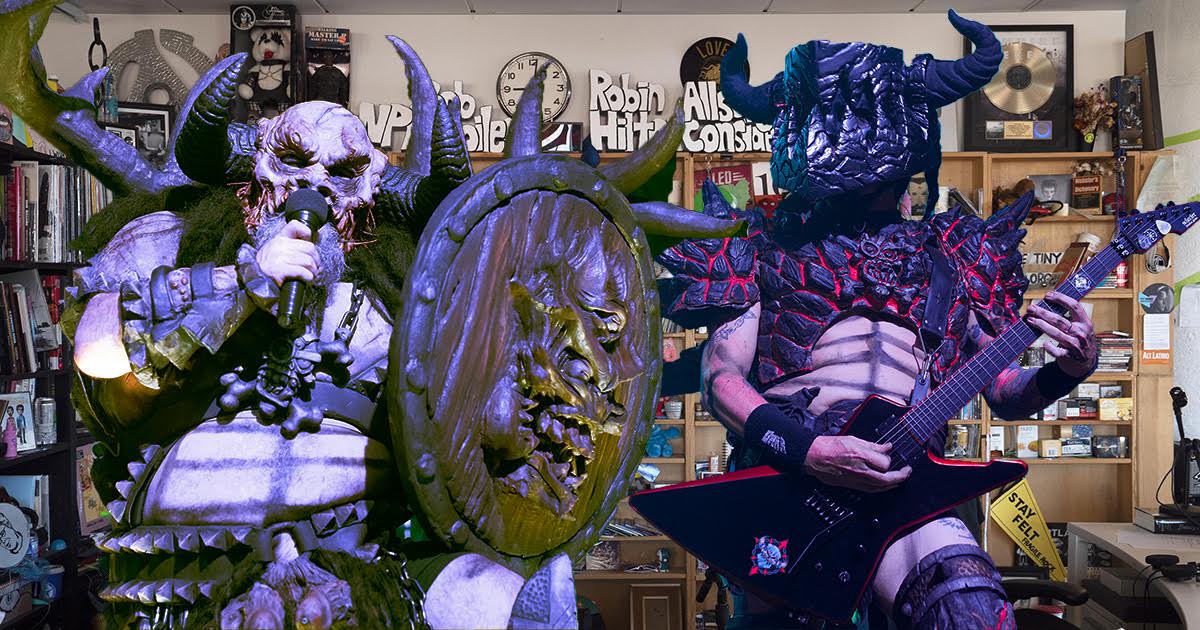 “Normally working security for NPR is a cush gig,” said Clint Maifeld, employee at Star Security Solutions. “Usually we get pretty tame acts, like Sheryl Crow or The Mountain Goats — everyone is always laid back and they let folks take pictures if they want. But when GWAR piled out of a skull-shaped van called the ‘Thunder-Thruster,’ I didn’t know what the hell to expect.”

“They were pretty polite when I was giving them their security passes, but then they said they’d be back to ‘fuck me to death later,’ which I found alarming,” added Maifeld.

“All Songs Considered” host Bob Boilen admitted he was surprised to see GWAR show up in full galactic Scumdog regalia.

“I stupidly thought the band would tone it down for an intimate performance like this, but I actually think it made them go even more over the top,” said Boilen while cleaning his workspace of viscera from the mock decapitations the band performed. “They brought what can only be described as a throbbing alien worm with several undulating teets. Three of our interns suffered minor injuries because the band fed them to the worm… and then sprayed those same interns with fake blood for eight minutes straight.”

For their part, GWAR seemed mildly surprised to be booked for the NPR program as well, before letting out a barbarian growl and kicking over a potted plant.

“When people book GWAR for a show, they expect a certain level of professionalism and theatricality. And we are going to put on the same show, whether there are 4,000 people or four scared office workers desperately trying to escape our wrath,” said Blöthar the Berserker, the band’s lead vocalist. “Which is why we had to spray our space-seed all over their fair-trade matcha lattes. GWAR kneels for no one: not the President, the Galactic Federation, or some whispering hipster apple-pickers.”

National Public Radio is currently having the carpets steam-cleaned and looking for a way to get stage-blood/sperm out of wool cardigans and vintage pork pie hats.