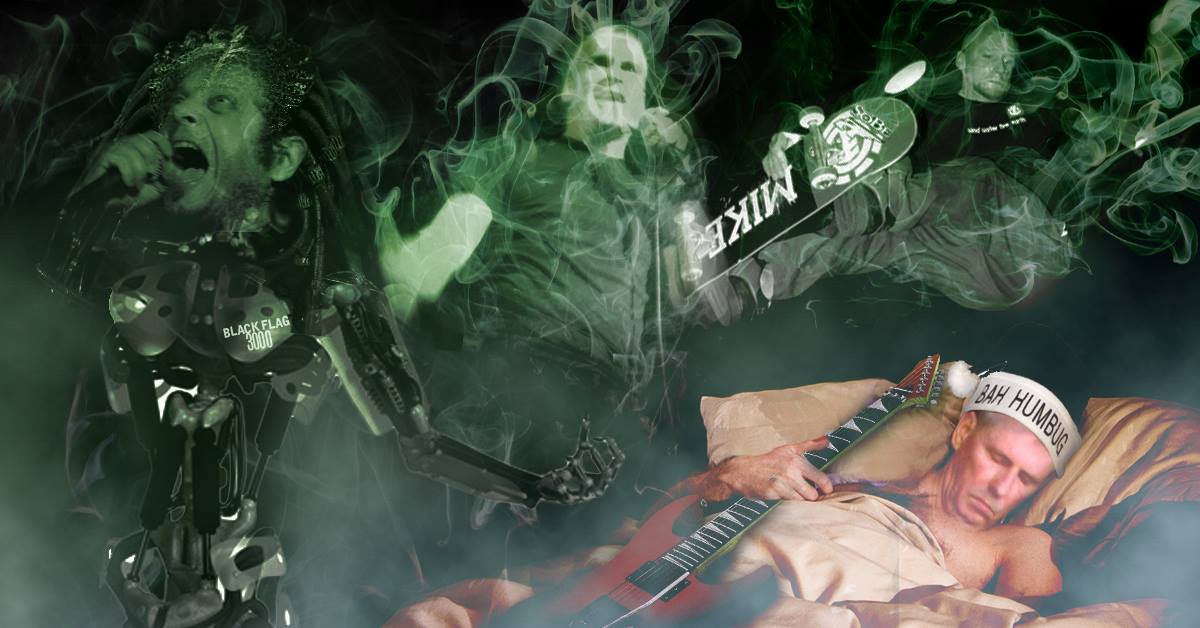 AUSTIN, Texas – Addressing his fans with a new-found sense of purpose, Greg Ginn, the miserly guitar player and leader of Black Flag, announced his surprising decision this morning to release his beloved band’s entire discography online for free, after reportedly being visited late last night by three ghosts representing the past, present, and future vocalists of Black Flag.

“I was at peace heading to bed, you see,” said Mr. Ginn during a press conference detailing his change of heart. “I’d just finished chewing out an intern who said he couldn’t package some My War LP reissues on Christmas day because he wanted to be with his family or something stupid like that. I told him, ‘tough shit kid, this is how hardcore happens.’ Suddenly, as I drifted to sleep, my bed began to shake.

“Out of nowhere, I see the ghastly apparition of Chuck Dukowski, covered head-to-toe in FLAG merchandise that seemed to be weighing him down. He told me that because I have ‘lost the ability to remember the true spirit of hardcore,’ I would be visited by three ghosts over the course of the night.”

Mr. Ginn reportedly attempted to resume his slumber once the specter of Dukowski retreated.

“I figured it must have been the pint of ice cream I ate right before bed that was fucking with me, but in what seemed like no time at all, I was awoken once again — this time by the long-haired visage of Henry Rollins in short-shorts. He looked at me and said, ‘Yo, Greg. It’s me. Hank. I am the ghost of Black Flag Past — let’s do this already,'” said Mr. Ginn.

Mr. Ginn claimed that the ghost of Rollins transported him back to Hermosa Beach in California circa 1983, when Black Flag’s lineup was at it’s peak, featuring Mr. Rollins on vocals, Mr. Dukowski on bass, and the remarkably-versatile Bill Stevenson on drums. Mr. Ginn smiled at the memories, but was quickly reminded that the pinnacle would end soon, due to his own shortcomings and controlling tendencies.

Related: Henry Rollins Driving App Tells You How Hard It Would Have Been to Get There in the ’80s

“I told Henry it wasn’t me (who ruined the band). It was the cops, it was the fans, it was the other band members not listening to me enough — but it was definitely not me. But then Henry’s ghost started talking about the D.C. scene… and I just sort of zoned out. I wouldn’t be surprised if that ghost is still talking,” said Mr. Ginn.

An attempt to return to normal slumber proved fruitless, as Mr. Ginn was once again awoken by another otherworldly visitor, this time the ghost of Black Flag Present, Mike Vallely.

“So then, out of nowhere, I’ve got the ghost of Mike V in my bedroom. He skates right up to the edge of the bed, does a street plant, grabs my hand and whisks me away to a courtroom,” said Mr. Ginn, struggling to remember the details of his vision.

“It was at this point I realized I was truly alone,” said Mr. Ginn, tears welling in his eyes. “I thought it was over once Henry left, but the worst was yet to come.”

After the apparition of Mr. Vallely departed, Mr. Ginn tossed and turned between his Egyptian cotton sheets before he was visited once more by a third and final vision, the ghost of Black Flag Future — a super-advanced cyborg of Black Flag’s original singer, Keith Morris.

“The final ghost was the most horrifying,” admitted Mr. Ginn. “Cyborg Keith took me to the future and showed me what was to become of Black Flag if I continued down this path. It was awful.”

Mr. Ginn’s vision of the future Black Flag was indeed bleak, featuring Cyborg Keith Morris eternally fronting Mr. Ginn’s band, with Mr. Ginn forced to continue to play even though he “just wants to die.” Professional skateboarder Bam Margera on bass duties and Chad Muska on drum machine rounded out the quartet, continuing in perpetuity Mr. Ginn’s habit of replacing musicians with semi-relevant professional skateboarders. Compounding the grim scene, the band was playing a record release show for their future album entitled No, Really. What The…?, which would be released as a “Wal-Mart Exclusive” title.

“I was actually OK with all of that, until Cyborg Keith showed me a list of Rolling Stone’s most influential punk musicians of all time, and I was number 84. I realized at that point I need to make a change,” said the reborn Mr. Ginn. “I’m hoping long-time fans will finally try to listen to The Process of Weeding Out.”

Update: Mr. Ginn has reportedly rescinded his previous declaration to release the entire Black Flag catalogue for free online, and will be requiring all SST employees to sweep his warehouse on Christmas day.