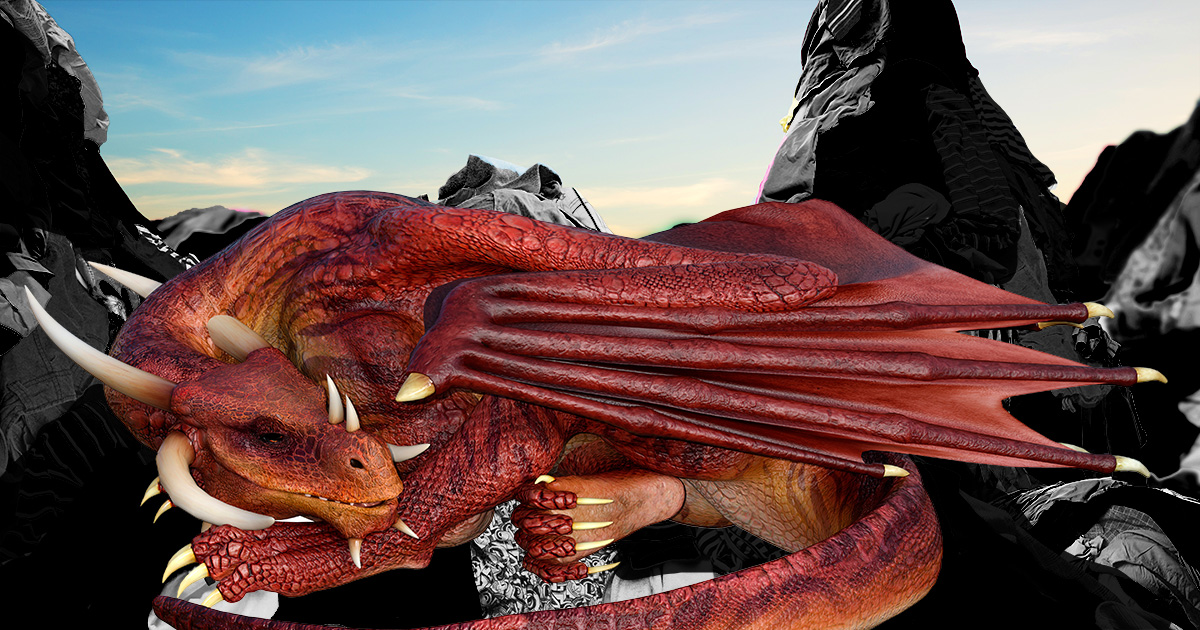 SKULL MOUNTAIN — The dreaded dragon Pwaun, bringer of fire and pain, was awoken from slumber yesterday upon his hoarded collection of medium-sized band T-shirts by a band of adventurers seeking prophesied riches, multiple well-travelled sources confirmed.

“We were hired by a mysterious wizard in black to retrieve the prize,” said Velktor the Brave, wiping thick, black dust from his face. “Little did we know what waited for us within: a beast 100 yards long, with scales of steel and teeth of iron. And there, beneath him… what must have been millions of well-fitting shirts from millions of bands.”

The legend of Pwaun was considered mere myth before yesterday. A riddle, found etched years ago into the bathroom wall of a local venue, spoke of the supposed shirts, reading, “The middle frock you seek ‘tis not here; it is a bed for what you most fear. May you be content with this women’s large? Cash only — there is no charge.”

“See? See? I told you so!” said Hansok the Merch Troll, who had told of Pwaun from beneath his humble merch table for decades. “‘Twas not I that stole the shirts — ‘twas the dragon, like I said! But nobody believed Hansok.”

“Please, please… buy a patch instead. Only seven gold!” Hansok added. “Tips for thee are greatly appreciated, and will come back to you tenfold in your next journey across the unknown plains.”

“How dare you attempt to steal my mediums!” Pwaun reportedly screamed at townsfolk as he destroyed their village following Velktor’s heist. “Do you know how many Zeppelin shirts it takes to cover my body? What if they tour again?! I wear what I wish, and none dare resist!”

Despite the tragedy, Velktor is allegedly determined to adventure again next week in hopes of discovering the fabled Land of Clean Gas Station Bathroom a Few Blocks from the Venue.