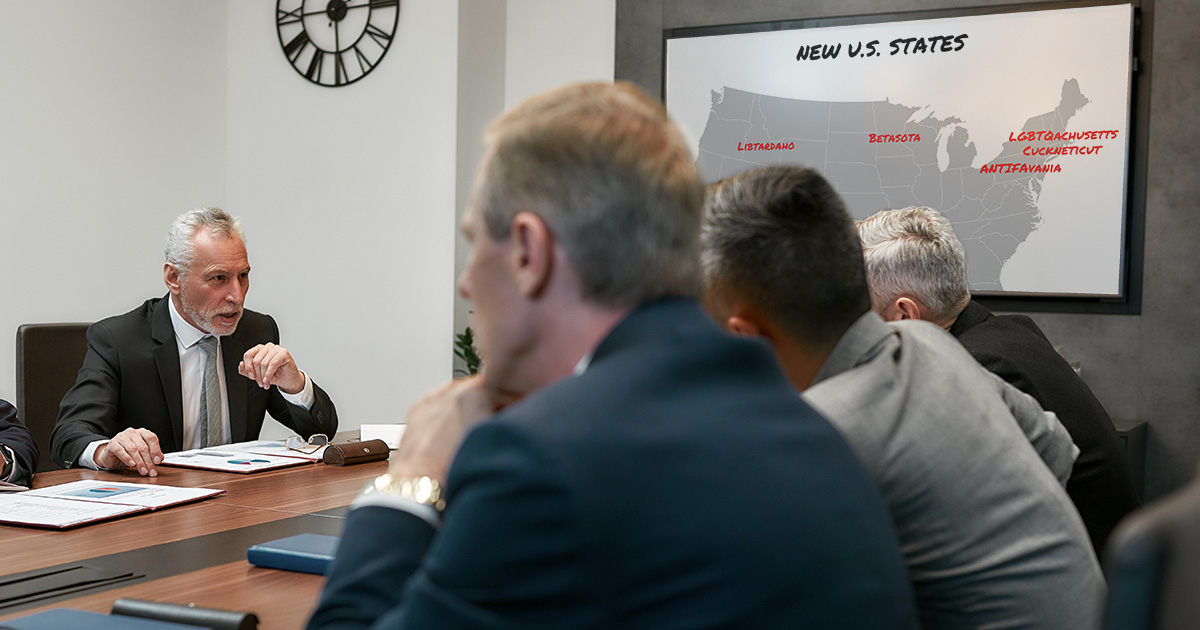 “The fact the folks on the radical left call this very simple move of creating fake maps, charters, and state histories ‘election interference’ is just so utterly ridiculous,” claimed Rep. Steve McGaugh. “Yes, of course the Koch Foundation spent hundreds of millions of dollars running television ads and printed media promoting them, but these maps are not legally binding and just a fun ‘What if?’ style map we made up as a goof — it’s like you might find in the front of a ‘Lord of the Rings’ book, or on the back of a Happy Meal. Why is the Democrat party against fun games? That’s my question.”

Citizens in the affected electoral “fun map” areas are waking up this week to find their mailboxes loaded with confusing, official-looking ballots for elections that don’t actually exist. Some residents of Washington, New York, and Oregon are receiving ballots asking for votes for citizens of “ANTIFAvania,” “Cuckneticut,” and “Soyklahoma,” among others.

“I don’t find it very funny at all,” said Sage Greenbrier of Olympia, Wash. “My friend in Los Angeles got an envelope that read, ‘Official Pedofornia Ballot enclosed.’ Is that real? I mean, do I live in Soyklahoma or not? I mean, I don’t really care either way; I just want to make sure I’m not associated with anyone from Spokane. Fuck them.”

“Shit, I need to call my parents and let them know this is all fake,” Greenbrier added. “If they see anything about this on Fox News, they’re going to automatically assume it’s true.”

So far, the Democratic response to the new maps has been fairly tepid.

“We are outraged and incensed by this level of voter suppression,” said Rep. Ami Bera. “That’s why we sent a 10-page letter to the House Ethics Committee for an official request for a preliminary review — the findings of which, hopefully after being voted on to be made public, will be revealed in early January… pending Phase 2 review and initiation, of course. These assholes don’t know who they’re messing with.”

Political entrepreneurs are cashing in on the maps with new T-shirts & bumper stickers featuring slogans like “Don’t Mess With Libtardaho,” “LGBTQachusetts Is for (Polyamorous) Lovers,” and “Betasota: Home of Voodoo Donuts.”