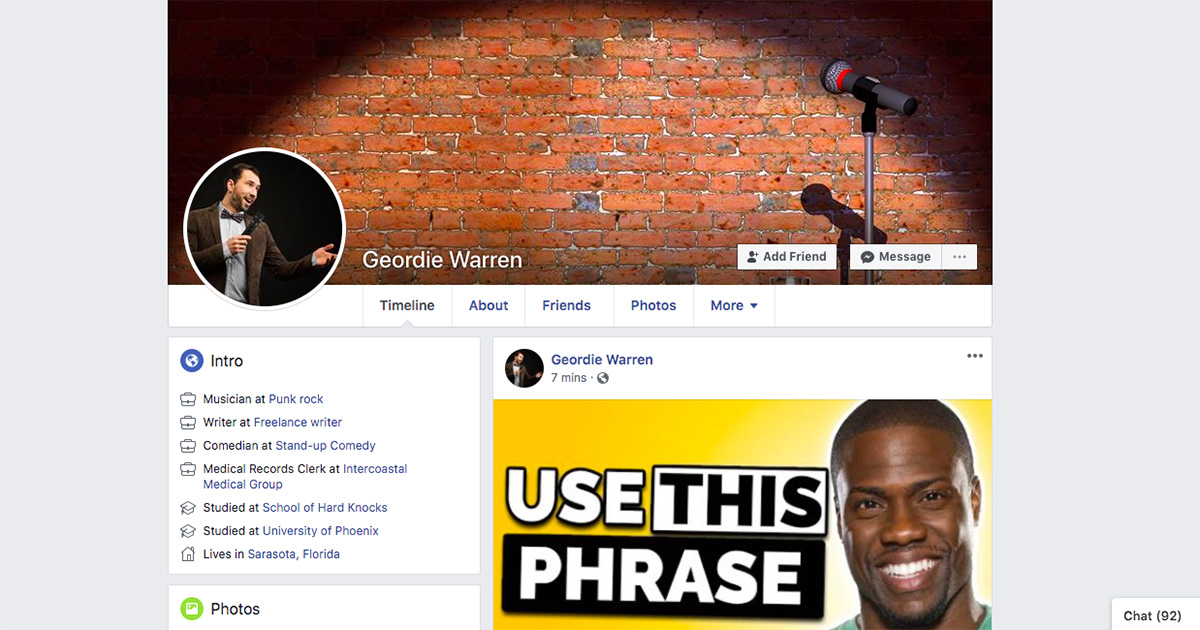 “Music is my dream… plus, writing, and also comedy. Sometimes a little needlepoint to mellow out. Filing paperwork isn’t my passion — that’s just temporary while I make a name for myself,” said Warren. “A lot of people told me, ‘If you don’t make it as an artist by 25, you should give up.’ And even more people told me that when I turned 30, and then again at 40. But if I listened to them, I wouldn’t be running my own open mic at midnight every fourth Tuesday down at Jerry’s Place.”

Operations manager and Warren’s supervisor Corrine Lively claimed Warren’s job performance has suffered due to his “fingers being in too many pies.”

“I’m all for employees having passions outside of work, but Geordie is burning the candle at both ends. Recently, during a team building exercise, he jumped up to do a five-minute stand-up chunk about how ‘black clerks and white clerks file medical records differently.’ Then he insisted we all play a game of ‘Zip, Zap, Zop’ — which is apparently some improv thing — but it was so embarrassing for everyone, I’ve been trying to block it out of my mind,” said Lively. “I also caught him printing hundreds of fliers for an all-ages music show Saturday night, which itself isn’t that bad, but the address for the show was our office building.”

Life coach Chaz Gilmore believes, however, that Warren’s commitment in the face of inevitable failure is admirable.

“As a creative, it’s important to work on your personal brand, no matter how stupid, shallow, or impossible that pursuit may seem,” said Gilmore. “I’ve worked with a lot of people like Mr. Warren, pursuing several different creative endeavors, and I always tell them the same thing: you should never give up on your dreams, or stop paying me to be your life coach. I’m living proof that the idea of ‘fake it ‘til you make it’ actually works — for my actual day job, I euthanize stray animals down at a shelter.”

Warren has since updated his education credit on his Facebook profile to “School of Hard Knocks,” which bumped the University of Phoenix down a position.